Die Zeit gets cosy with PARIS

Our German readers might like to nip out today and grab a copy of this week's Die Zeit, which has a handy guide on how to make the ultimate paper plane. 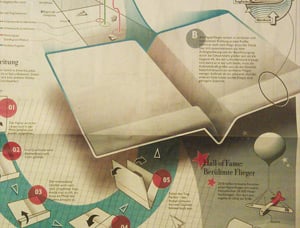 We're obliged to Thorsten Winterer for whipping out his camera this morning to record part of Die Zeit's comprehensive coverage (see right, click on snap for a big version).

Thorsten notes that the article has a "Hall of Fame", headed up by our very own Vulture 1, the Guinness World Record-holding flagship of our Paper Aircraft Released Into Space (PARIS) mission.

The blurb reads: "In 2010, British scientists let a paper plane ascend to 26,000 metres using a helium balloon. From there, it descended calmly down to Earth."

We're not sure that Die Zeit has completely captured the intricacies of our Vulture 1 release mechanism, but it has done a nice job on rendering the spaceplane itself, albeit with our heroic Playmonaut labelled as a "Kamera": 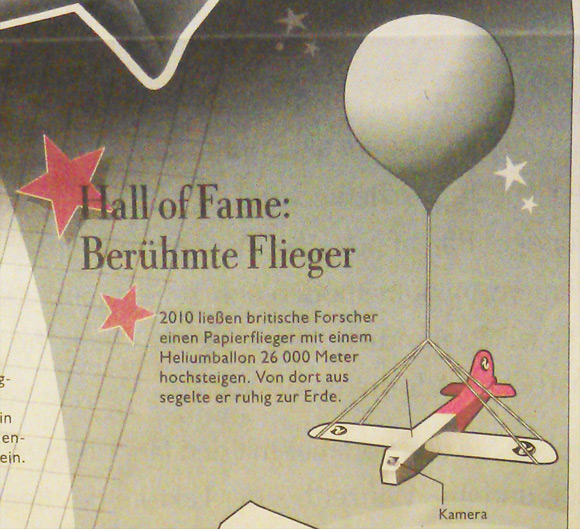 You can find out full PARIS coverage right here, although of course we've now moved on to LOHAN, our Low Orbit Helium Assisted Navigator. ®

Customers could be better off with specialist providers and service partners, Chocolate Factory decides
Applications19 Aug 2022 | 7

If you absolutely must keep using those proprietary formats, walk this way
Applications19 Aug 2022 | 23