Hot Jupiter planet systems aren't harbouring any Earthlike worlds because they're too busy systematically decimating any planets that pop up. 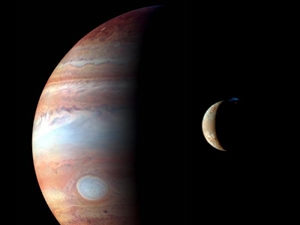 Boffins have discovered that because of the way so-called hot Jupiters are formed, they're generally the only planets in their systems as they destroy any other low-mass planets made.

The hot Jupiters are first fried far away from their sun and then gravitational interactions elongate their orbits until they're swinging by very close to the star and then swooping back out far away. This means their sun raises the tides on the planet, causing its orbit to become smaller and more circular, so that the hot Jupiter knocks out any littler planets in its path.

The researchers used data gathered by NASA's planet-hunting Kepler mission to find 63 planetary systems which had hot Jupiters in them and then searched those for any extra worlds orbiting about. In all cases they found no evidence of any extra planets.

However, when they checked a sample of warm Jupiter systems (the same size of planet but not so close to its system's sun), and hot Neptunes (smaller planets but nearer to their sun), they found that 10 per cent of the former and a third of the latter had other worlds nearby.

"The lack of nearby planets supports the theory that a close encounter with another body in the system caused the elongation of the orbit," University of Florida professor Eric Ford said in a canned statement.

"When a giant planet repeatedly passes through the inner regions of a planetary system on an elongated orbit, it would wreak great havoc on any planets that had formed there.

"The other planets would either fall into the star, collide with the hot Jupiter or be kicked out of the system via a gravitational slingshot."

The research, which helps narrow the search for Earthlike planets somewhat, was published in the journal of the Proceedings of the National Academies of Sciences. ®