With a new processor, you obviously need something to stick it into, and I have here the DZ77GA-70K motherboard, part of the Intel's Extreme series of motherboards. Intel has a wide portfolio of boards - there are seven series that cover the desktop range alone, and there are other product lines for workstation and server use. 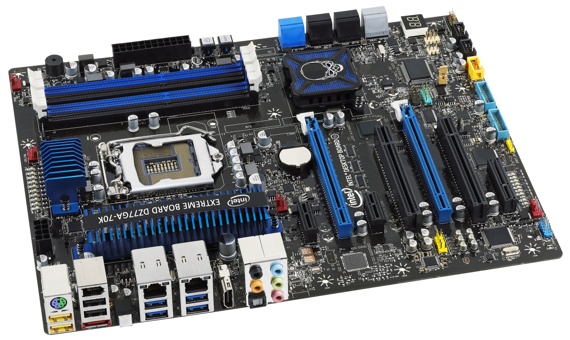 There’s nothing eye-opening about the DZ77GA-70K, apart from the Bios, but more on that in a minute. It’s a typically stable high-end Intel board. It’s based around the new Z77 Express chipset which brings native support for USB 3.0 - finally!!! - along with PCI Express 3.0, provided there’s an Ivy Bridge CPU sitting in the socket.

It’s a tidy looking board, well laid out with separate passive coolers on the chipset and the power components with two PCIe 3.0 x16 (x16/x8) slots, single PCIe x4 and x1 slots, and two standard PCI slots for expansion purposes. For storage there are four 6Gb/s and four 3Gb/s Sata ports, which are all mounted at 90° on the edge of the board. 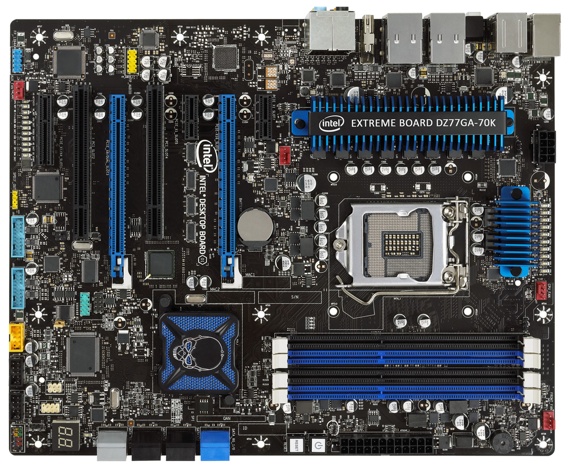 Intel's DZ77GA-70K has no shortage of expansion slots

The new Intel Visual Bios is a revelation and even gives Asus and Gigabyte - which have some of the easiest to access UEFI Bioses around - a good run for their money. UEFI (Unified Extensible Firmware Interface) has been around for a while. For those not in the know, it uses a GUI instead of the text interface and does way with the need to use the keyboard, instead allowing the use of a mouse, Yes, a mouse. Or a touchscreen even, it'll support that too.

The Ivy Bridge Core i7-3770K doesn't make a giant leap ahead of the previous generation of Core i7 chippery. It’s more of gentle step forward. But the die shrink down to 22nm does make for a far more power efficient chip than the previous generation - good for your leccy bills - and at last Intel’s integrated graphics supports DirectX 11, something it has needed to do for quite some time. ®