Virgin Media's main website dropped off the interwebs on Tuesday with hackivist collective Anonymous claiming responsibility for the DDoS attacks in response to the company's recent cut-off of The Pirate Bay.

The telco said it had to down its "customer-facing" website for about an hour last night, after it was hit by Distributed Denial of Service attacks yesterday evening.

At the time of writing the site remains offline – although VM is claiming that it is "back online" as of this morning, following "intermittent" problems overnight.

Still out of action this morning

Our website, virginmedia.com, has been the subject of denial of service attacks so we took the site offline for a short period of time. We're aware some groups are claiming the attacks are a result of the recent High Court order which requires ISPs to prevent access to The Pirate Bay.

As a responsible ISP, Virgin Media complies with court orders but we strongly believe that tackling the issue of copyright infringement needs compelling legal alternatives, giving consumers access to great content at the right price, to help change consumer behaviour.

It's understood that rival ISP TalkTalk, which already offers web-filtering to its punters and was ordered by a High Court judge last week to shut off access to The Pirate Bay website, has also been targeted by hackers.

TalkTalk hadn't immediately returned our request for comment at time of writing. 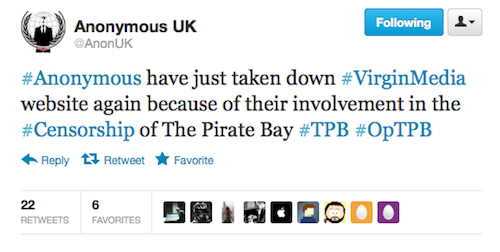 An Anonymous representative claimed on the group's Twitter feed that the hacktivist group had attacked Virgin Media to protest against the company's "censorship" of The Pirate Bay. ®