The demand for HDD capacity continues unabated as there is no alternative whatsoever for fast access to online data; NAND flash fabs are in short supply and have a long lead time. In 2011, 70 per cent of all the shipped petabytes were HDDs, with optical, tape, NAND and DRAM making up the rest. Some 350,000PB of disk were shipped, compared to about 20,000 PB of NAND.

WD's COO, Tim Leyden, reckons another 40 NAND fabs would be needed to make 350K PB of NAND, and that would cost $400bn at $10bn/fab capable of shipping 8.8K PB/year. It isn't going to happen any time soon.

WD sees flash caches as helpful in lowering HDD seek-time latency and it is going to follow Seagate's lead and introduce hybrid flash/disk drives in the next 12 months or so, being careful not to provide any timing or product details.

Will we see single platter hybrid drives from WD? They would offer a fast resume and consume little power, making them a good fit for Ultrabook-type devices, a better fit than pure disk drives and more affordable than an all-flash drive. "Will we see them?" we asked Tim Leyden. "Yes, maybe." He pointed out that WD does not make the flash media that would be used in such drives if they appeared.

We asked a person close to WD about this. He said that Intel thought a 20-24GB flash cache in a 5000GB drive could provide a 95 per cent cache hit rate. There would be 4GB for the operating system and 20GB for application files and a data cache. This is approximately a 20:1 HDD to flash ratio.

This thinking differs from that implied by Seagate's pioneering Momentus XT hybrid which comes with 500GB disk + 4GB of flash or 750GB disk + 8GB flash, meaning a 125:1 or 94:1 disk to flash ratio. We think Seagate is using a single flash die and optimising for cost rather than the cache hit ratio.

For WD, a 24GB cache would need three 8GB dies and the hybrid HDD would need to fit Intel's ultrabook specs. Will we see a hybrid Velociraptor drive? Leyden replied: "Hybrid tech could be applied to any form factor and to any interface." That's a yes then.

My thinking here is that we will definitely see WD making hybrid drives for internal fit in client systems – meaning Ultrabooks, notebooks and desktops – with users happy to pay the expense of an added cache to bypass the Windows wait. When will they arrive? I'm guessing that announcements will come by the end of the year and that WD will offer hybrid drives through its OEM, reseller partner and retail channels as, for example, a retrofit option to existing client devices.

The likelihood of external drives getting a hybrid option is low, unless such drives connected by USB 3.0 or Thunderbolt, become boot drives, and that doesn't seem likely.

The areal density heart of the matter

WD says that HDD areal density growth has slowed from an annual 40 per cent compound annual growth rate to just 20 per cent as the current PMR recording technology nears its maximum efficacy, with a transition to energy-assisted magnetic recording (EAMR) coming and representing the possibility of regaining the 40 per cent rate. HDS calls this thermally assisted magnetic recording (TAMR) and Seagate calls it heat-assisted recording (HAMR), by the way. PMR bits that get too small lose their stability and some form of energy-assist is needed to make very small and more stable bits alter their state. 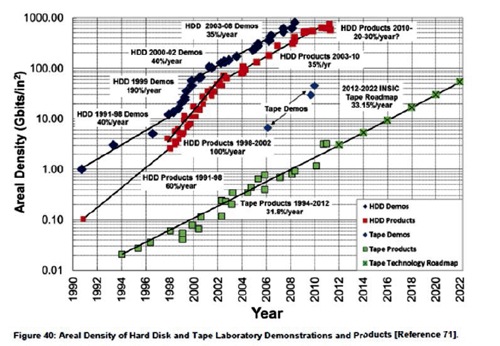 An interim step will be to lay down overlapping tracks on PMR media like roof tile shingles; good for reading but bad for writing as partially underlying tracks to the one to be written have to be rewritten as well, extending write times and limiting the usability of shingled recording disks.

Our WD source said that once a technology was fully demonstrated in the lab, it took about three years for a commercial product using it to appear.

We might see shingled media in 2016 and EAMR media after 2016. The HDD industry is agreed on heat-assisted methods as the least costly and leaset complicated way forward, stabilising smaller bits that way rather than the more difficult and expensive bit-patterned media.

An interim way of improving capacity is to add platters to existing drives. We might see one extra platter added so as to ensure that the drive can still fit in the standardised slots used by storage array and server suppliers. Thus WD's sixth generation 1TB Velociraptor uses three 333GB platters instead of the previous generation's two 300GB ones.

Our contact said that 5-platter 3.5-inch drives were a possibility.

With a trend towards thin and light drives for Ultrabooks, the possibility of platter addition is denied in this market sector.

Could we see more than one read/write head per platter surface as a way of improving disk I/O?

Leyden: "Yes but there is a cost. If there is an application that will pay ... for more heads then yes... The possibility of application-specific storage is at an all-time high. Connor [Peripherals] made a drive with two actuators."

He pointed out that storage tiers are typically defined by 5:1 economic changes, adding: "A dual actuator drive would not create a 5:1 economic advantage."

So will we see two heads/platter surface drives? No one would say, but they didn't rule it out either.

There was no mention of faster spin speeds for 2.5-inch drives. We got the feeling that hybridisation was the answer to disk drive seek time latency problems and not a boost in rpm.

One other thing: 12Gbit/s SAS interface drives are definitely coming.

It's clear that enabling boosters for PMR technology are hybrid drives on the performance front and platter count increases on the capacity front. Then we will see shingled media – and after that WD sees EAMR technology providing a recording technology boost that will be sustainable for a few years, before it too matures and something else is needed.

In a world that demands ever more capacity in fixed space slots, the disk drive technologists and engineers can never stand still. Today they make probably the most complicated electro-mechanical device in history and over the next few years they will make it even better – faster and more capacious. HDD technology is amazing, dazzling technology and there's nothing that could feasibly replace it for the next decade or more. ®