If the Xeon E5-2600 is a draft horse that is bred to pull a plow or heavy cart, then the Xeon E5-2400 was bred to pull a small coach or maybe even to be saddled up to ride. The Xeon E3s are more of a pony, then, in this analogy, and the Xeon E7s would be a Belgian draft horse, and a very large one at that, and the Xeon E5-4600s might pull a milk cart or beer wagon. (This is not a perfect analogy, obviously.) Depending on your workload – what you need to pull and how quickly you need to do it – you can team up the horses first through SMP clustering, where they are lashed to the same plow or wagon, and if you have more work to do, you get multiple teams to carve up the deliver routes or acreage and do the work in parallel (this is looser coupling at the software level instead of in the hardware). The important thing is that you have to feed to horse, and it is expensive. So you only get the right kind of horse for the job and the minimal number possible. 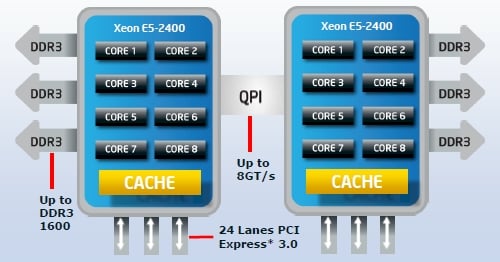 The Xeon E5-2400 is aimed at entry server customers who don't need the memory and I/O expansion of the E5-2600 but who nonetheless need more than the Xeon E3 can offer. Here's one comparison that Intel has ginned up to show the relative performance differences: 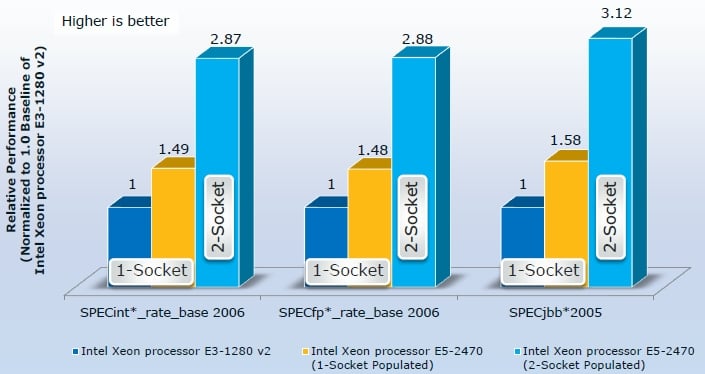 The above comparison shows how a single-socket Xeon E3-1200 v2 stacks up against a Xeon E5-2400 with one socket and then two sockets populated. Generally speaking, the Xeon E3 v2 processors have faster clocks, but they only have four cores compared to four, six, or eight with the E5-2400s.

In the example above, Intel is pitting a server with one four-core E3-1280 v2 running at 3.6GHz (this is just shy of being the top bin part) against a machine with one or two top-bin E5-2470s running at 2.3GHz with eight cores. Thanks to the core count, on the SPEC integer, floating point, and Java benchmarks shown, even with the lower clock speeds, a single Xeon E5-2400 can do about 50 per cent more work than the Xeon E3-1200 v2, and adding the second E5-2400 to the box yields around triple the performance because the overhead on two-socket SMP is very low thanks to the peppiness of the QuickPath Interconnect.

Like other Sandy Bridge chips, both the Xeon E5-2400 and E5-4600 have 32KB of L1 instruction cache, 32KB of L1 data cache, and 256KB of L2 cache per core. On-chip L3 caches for these two chips weigh in at 20MB, but when Intel finds a chip with gunk on the portion of the cache that meets clock speed parameters, it goes from a top-bin part down to other parts in these lines, with L3 cache that can be as low as 10MB. The good news is that decommissioned L3 cache saves a bit of power. The bad news is that it adversely affects performance. There ain't no such thing as free oomph.

The Xeon E5-2400 has three DDR3 memory channels per socket with two memory slots per channel, for a total of a dozen sticks for a two-socket box. Memory speeds vary by model, with top-bin parts offering 1.6GHz memory running at 1.5 volts if you need speed (as many HPC shops do). If thermals are an issue, 1.35 volt memory can spin up to 1.33GHz in these systems, and if budget is a concern, 1.07GHz and 800MHz DDR3 memory sticks are also supporting. On the top three SKUs in the E5-2400 range support 1.6GHz memory and the two lowest bin parts only support the two lowest memory speeds. Memory capacity tops out at 384GB, half of what the E5-2600 offers because it has more channels and slots per channel.

The QPI link between the two Xeon E5-2400 sockets also changes along with the memory speed, with the top three bins having a QPI link running at 8GT/sec, the two low bins running at 6.4GT/sec, and the remaining parts in the middle running at 7.2GT/sec. The two low-bin parts do not have Turbo Boost or HyperThreading and only have four cores and burn a little hotter than you might expect. But they have one very important virtue: a really low price. L3 cache sizes decrease as you move from top to bottom bins, as is always the case with Intel Xeon chips.

Just so you don't have to go hunting for it, here is a table for the Xeon E5-2600 chips announced back in March so you can see how they differ from the E5-2400s. 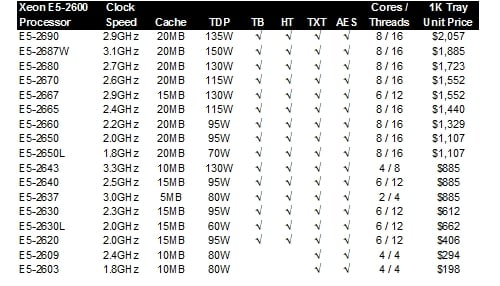 It will be interesting to see how full systems price out based on the E5-2400 and E5-2600 processors. El Reg will be sorting that out once the server-makers get their machines into the field in the coming weeks. We'll also be sorting out how the new Xeons stack up against the new Opterons inside actual boxes. Suffice it to say that the E5-2400 is aimed at the dual-socket Opteron 4200 server and the E5-2600 is aimed at the two-socket Opteron 6200 server.

Next page: Four socket to me
Page: