RS Components, one of two distributors for the Raspberry Pi, says the 75,000 of the tiny computers are burbling through the manufacturing supply chain and will be ready for release “in July to August”.

Speaking at a press event in Sydney today, ANZ Country Manager Jeremy Edward said many buyers of the computer come from within RS Components' traditional customer base of hobbyists and engineers. Many are repeat buyers who he said already likely possess the programming and electronics skills the Pi is intended to foster.

But RS Components is taking steps to make the Pi more available to its intended audience and to the 300,000 buyers who are still waiting for their byte of a Pi. CM Lim, the company's Asia Pacific head of Electronics Marketing, said the company is looking at every link in the supply chain to meet demand that “took everybody by surprise”.

One step in that process is a new order procedure that sees orders opened to just 15,000 buyers every two days. Organising buyers into batches is hoped to streamline the manufacturing process.

The effect of the Pi on RS Components' overall business is mixed. Edward said the company “won't make money, but might get famous.” He also said that the advent of the Pi has dented sales of other single board computers.

“Pi sales have overtaken Arduino in an instant,” he said, attributing the surge of interest to the Pi's small price and the wealth of developer tools it offers. ®

At the event, your correspondent nestled a Pi into his iPhone 3G case. We've dubbed the result the PiPhone. 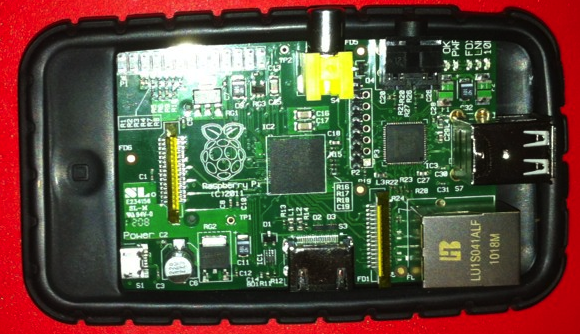