NSFW The Advertising Standards Authority has sunk its teeth into the Manhattan Bar in Stoke on Trent, for a Facebook promotion "likely to cause serious or widespread offence". 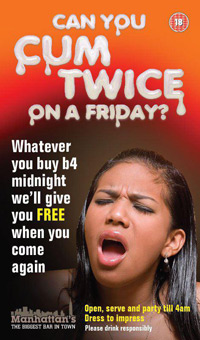 The ASA ruled the offending ad, seen right, in breach of CAP Code (Edition 12) rule 4.1 (Harm and offence), and ordered that it must not appear again in its current form.

It also told the bar "to ensure their future advertising did not contain anything that was likely to cause serious or widespread offence".

The Manhattan Bar "did not respond to the ASA's enquiries", prompting the watchdog to express concern over the "lack of response and apparent disregard for the Code".

This morning, the ad was still available on the bar's Facebook page, although "the BIGGEST party in Stoke on Trent", as the establishment describes itself, has put together a "sensord" version.

The Manhattan Bar is a pretty lively spot, according to Staffordshire cops, who recently dubbed it "one of the worst" in Stoke city centre. ®