EMC says its newest array is the industry’s highest-performance, highest-capacity storage system. It's designed for the hybrid cloud and demanding enterprise data centres. According to our sneak peak there will be three new VMAX models with the 40K at the top, followed by the VMAX 20K, a renaming of the current top-end VMAX, and the VMAX 10K – a renamed VMAXe, the entry-level one.

VMAX arrays have a Virtual Matrix interconnecting the controller engines – up to eight of them – and the drive bays. The 20K has a dual virtual matrix whereas the 40K has a quad one, doubling the internal bandwidth in effect. 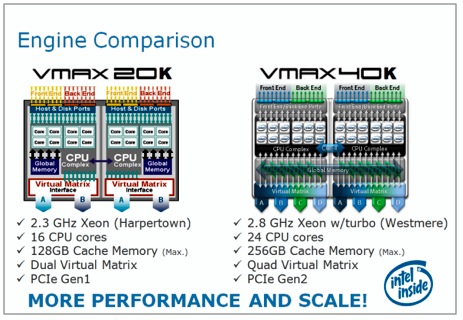 VMAX 20K engines are powered by 2.3GHz Harpertown Xeons with 16 cores available and a PCIe gen 1 bus. The 40K uses 2.8GHz Westmere processors with 24 cores and a gen 2 PCIe bus – so it's much meatier.

There is no change to basic front-end port connectivity protocols with Fibre Channel, FICON (though not on the 10K), 1 and 10GbitE, and FCoE and iSCI available, but we imagine that 16GBit/s Fibre Channel is either on the list or coming.

There can be high-density or dense VMAX 40K configurations using 2.5-inch SAS drives or standard configurations with 3.5-inch drives. In the latter case, an EMC document we have seen states "a fully loaded VMAX 40K dense option can support up 2.8 PB in eight storage bays with 3,200 (2.5-inch) drives".

Compared to an equivalent VMAX configuration, the dense VMAX 40K has:

The systems bays in either a dense or standard VMAX 40K configuration can be separated by up to 25 metres (82 feet) to spread the weight across the floor or to get around obstacles such as ceiling columns in the data centre. 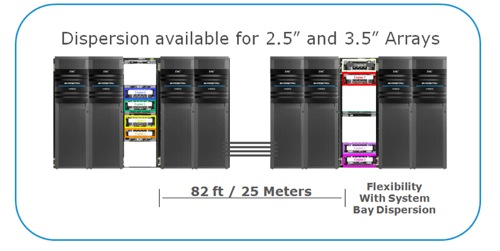 The new VMAXes come with v5876 of the Enginuity operating system, which will also run on existing VMAX systems.

FAST VP gets SRDF, EMC's asynchronous or synchronous replication facility, awareness to increase array performance in disaster recovery situations. The new version of Enginuity also provides virtual provisioning in IBM System z (mainframe) and IBM i environments. This "automatically balances the workload by wide-striping data across all devices in a virtual pool". FAST VP is also made available in these two IBM environments, EMC says this should provide dynamic performance optimisation in System z environments and increased efficiency in 512-byte IBM i deployments.

The latest Enginuity software features dynamic back-end configuration with system calls used to modify specific configuration items instead of microcode loading. This shrinks the system lock duration involved in such changes. More concurrent configuration changes can take place in a reduced maintenance window with less disruption. Such changes can include:

The VMAX 40K and 20K have the RecoverPoint splitter integrated into the array, meaning they can replicate to heterogeneous arrays. The 10K has SRDF features added enabling it to replicate to 20K and 40K in SRDF configurations. It supports 3-site cascaded and concurrent configurations and a star configuration. All the new VMAXes have snapshot capability through TimeFinder VP Snap.

EMC describes the 40K as an industry leader:

Competitors will have no choice but to bid TWO of their arrays to compete with larger VMAX 40K configurations, a competitive disadvantage that increases footprint, acquisition costs, and operational complexity.

EMC is claiming to be top data centre dog and slamming competing arrays into subordinate performance tiers that its lofty VMAX 40K can use, via FST. As far as EMC is concerned, this means customers can now eke the last bit of storage use out of these in-place assets before they come to their end-of-useful-life and get retired. ®

* Although VMAX can use flash solid state drives it has been designed as a disk-drive-based array and newer flash array designs get more cost-effective use out of their flash capacity than an all-flash VMAX will.