Following a long winter hibernation burning the fat reserves gained from a generous serving of Dutch delicacy kapsalon, our Special Projects Bureau post-pub nosh team has emerged blinking into the spring sunshine to bring you a further selection of quality international cuisine designed to soak up the excesses of a night on the town.

Brace your arteries and prepare your cholesterol to repel boarders, then, against a veritable fryfest of Scottish dish mealy pudding versus Spanish contender migas.

First up to the chopping board is mealy pudding (or mealie pudding, if you prefer). This rustic Jock mélange of beef suet*, oats and onion is probably best known as a vital part of the heart-attack-inducing Celtic solidarity full Irish breakfast, where it takes the form of a sausage fried in slices à la black pudding. In this cordon bleu scenario it's known as "white pudding", since it's just as deadly as its black cousin, but merely lacking the input of a pig that's had its throat cut and blood put to the service of frying-pan-wielding human carnivores.

Our mealy pudding recipe, though, gets right back to basics. No sausage skins or spices here, just half a pound of oats, the same amount of suet, and a couple of medium sized onions, finely chopped - all of which is crammed into some cheesecloth and boiled to within an inch (0.1814 linguine) of its life. 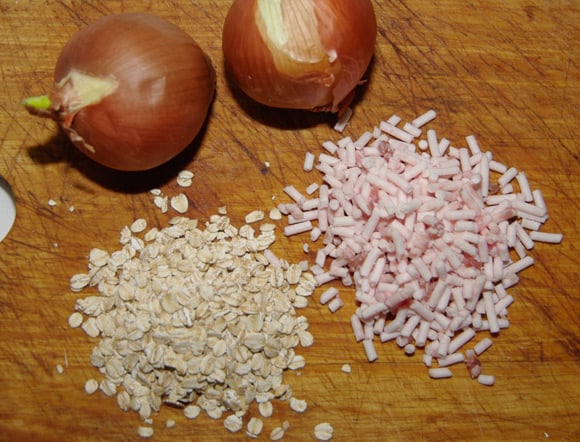 You'll also need a teaspoon of salt and a sprinkle of black pepper, if you fancy it, and if the latter exotic bourgeois spice isn't too softy southerner for you. Here's how to proceed, in our now traditional handy cut-out-and-keep guide format: 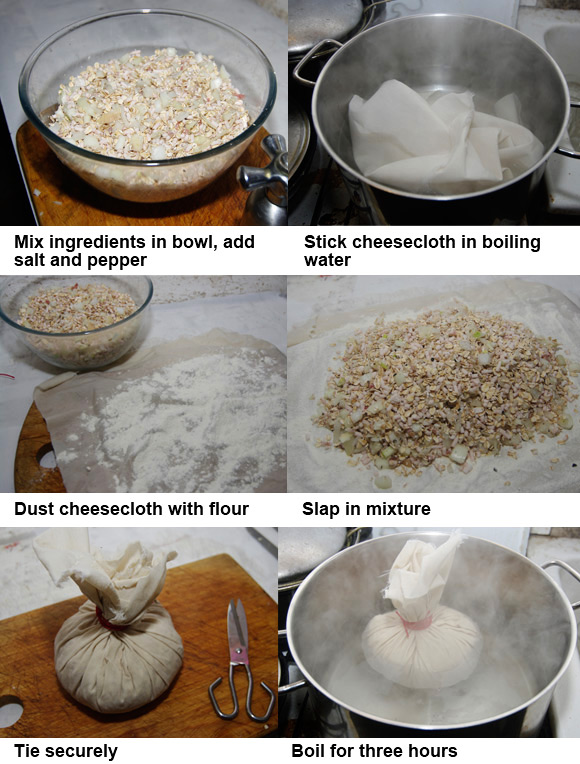 Simple as that. We'll come back to the mealy pudding later, when it's presented to our gourmet judging panel to see how it measures up to our second offering - migas.

Migas (literally "crumbs"), is a popular Spanish dish based on slightly stale bread thrown together with other Iberian staples. It's traditionally a budget nosh-up for cash-strapped shepherds, hence its full name migas de pastor.

It really is best not to ask a Spaniard what the 100 per cent authentic ingredients of migas might be, since world+dog – and indeed their grandmother – are convinced their recipe is the only true path to bread-based calorific enlightenment.

In our case, we relied on my old mucker Juanjo, owner of Bar Almanzor, in my local town of El Barco de Avila, to point us in the right direction. According to him, this is what you need to make migas: 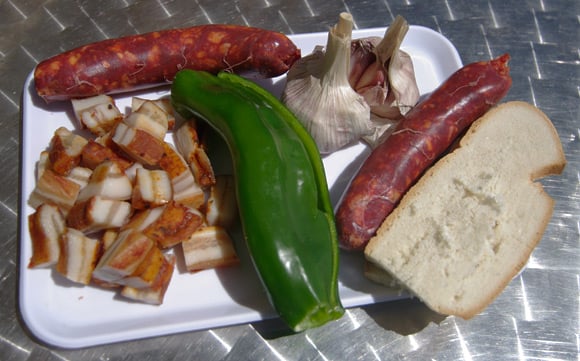 Here we have panceta (raw, thick-cut streaky bacon, not to be confused with Italian pretender pancetta), raw chorizo, some sweet green peppers, garlic and bread. Add to your list two or three teaspoons of sweet paprika, plus some raisins or sultanas to further sweeten the mix, and you're good to go.

The proportion of the above ingredients is a matter of taste. The basic plan, according to Juanjo, is to make sure there's plenty of bread, and take it from there.

The bread is by far the most critical ingredient. You'll need a decent unsliced loaf, which has been standing for a day or two, and allowed to go a tad stale.

Not too stale, though. Getting the right moisture content is a bit of an art, and if you think your bread's too dry, try sticking it in a plastic bag and lightly sprinkling it with water after you've chopped it into cubes, as per the first step of our photo guide: 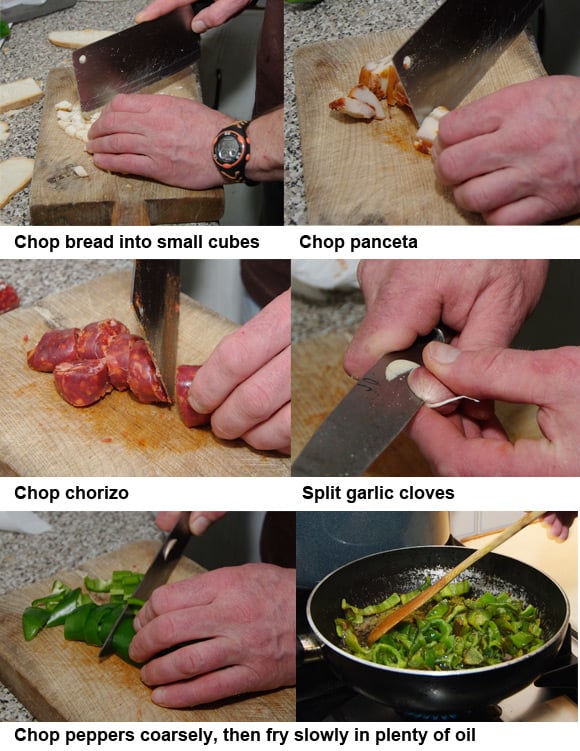 Wish you could IP Freely? What's the wording holding you back in your current job?
On-Prem3 Feb 2023 | 65