Cheaper memristors could result from an accidental discovery at University College London.

The HP-popularised memristor device is a form of ReRAM – resistive RAM – and is fairly expensive to make. Metal oxide-based ReRAM technology promises to combine minimum memory speed with NAND non-volatility and be able to provide higher capacities than NAND, which is thought will cease to be usable as process geometries go down past 10nm. ReRAM dies will need less electricity to run and will take up less space than equivalent capacity NAND.

A team from UCL experimented with silicon oxide to make LEDs, and accidentally caused the arrangement of the silicon atoms to change and form less resistive filaments within the solid silicon oxide. The switch in resistance is made much more efficiently than before, and the process has been described in a Journal of Applied Physics paper.

The brainiacs were trying to make LEDs, but found that their devices appeared to be unstable. A UCL PhD student in the department, Adnan Mehonic, was asked to look into this and found that the silicon oxide wasn’t unstable at all, and in fact was flipping predictably between various conducting and non-conducting states.

He said: "My work revealed that a material we had been looking at for some time could in fact be made into a memristor. The potential for this material is huge. During proof-of-concept development we have shown we can program the chips using the cycle between two or more states of conductivity. We’re very excited that our devices may be an important step towards new silicon memory chips.” 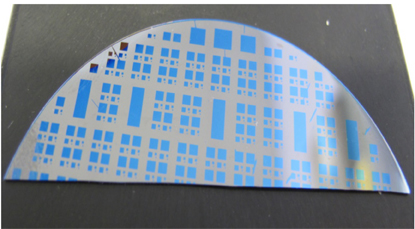 A UCL release says: "The UCL devices can also be designed to have a continuously variable resistance that depends on the last voltage that was applied... Devices that operate in this way are sometimes known as ‘memristors’."

A silicon oxide-based memristor could be incorporated into silicon chips using variations on existing semi-condictor processes.

Dr Tony Kenyon, a reader in photonic materials in UCL's Electronic and Electrical Engineering department, said: “Our ReRAM memory chips need just a thousandth of the energy and are around a hundred times faster than standard flash memory chips. The fact that the device can operate in ambient conditions and has a continuously variable resistance opens up a huge range of potential applications."

There is more about this topic on Dr Kenyon's website, where El Reg found the table below:

Dr Kenyon added: “We are also working on making a quartz device with a view to developing transparent electronics.” This could be used to give touch screens and other mobile device screens a memory capability. ®