Pic History is just days away from being made as SpaceX' Dragon cargoship finally blasted off successfully on its Falcon 9 rocket this morning on its way to a rendezvous with the International Space Station. 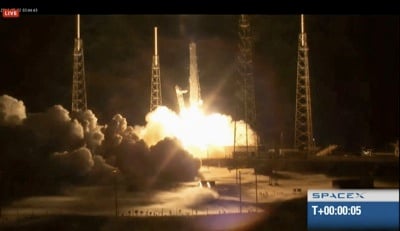 Elon Musk's private space firm has had a number of setbacks with the latest test flight of the Dragon, delaying again and again to make sure the software that will put it within spitting distance of the ISS was working properly. And just when it seemed there was no stopping the takeoff last Saturday, the computer held the ship on the ground.

The engines were already firing when the computer "saw a parameter it didn't like" and aborted the trip. SpaceX engineers later replaced a faulty pressure valve.

However this morning at 08:44 UK time (03:44 US Eastern) there were no problems and the Falcon 9 rocket lifted off on schedule to place the Dragon capsule into an orbit which will carry it to a rendezvous with the station on Friday if all goes to plan.

The first hurdle in the commercial company's maiden berthing with the ISS has been jumped, with the Dragon out of Earth's atmosphere, but there's still a lot to prove before Houston will give the go to attempt a docking. 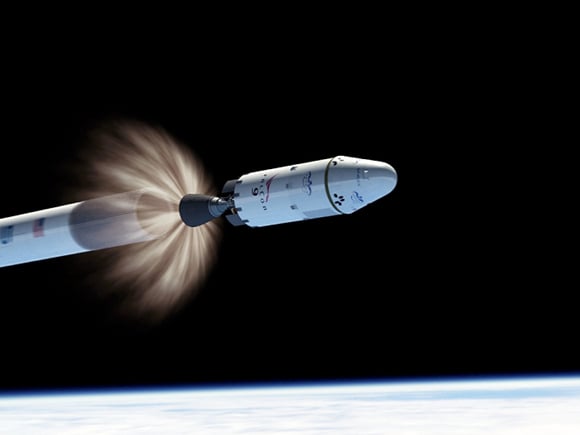 On the third day of its flight, the Dragon will perform a burn that will bring it to a path 2.5km below the station, during which it needs to test its Relative GPS system - the bit that stops it bumping into the ISS. Crew members aboard the station will also test if they can take control of the Dragon by telling it to turn on its strobe light.

The actual hook-up is scheduled for the Friday, when the Dragon will position itself 2.5km below the station again and await a signal from Mission Control that it's allowed to approach. The spacecraft will move to within 1.4km and wait again and then to 250m away and once more wait for Houston's go ahead.

The Dragon will then edge closer, to within 220m, where the crew will take over and tell it to retreat, to check that they can control the craft if they need to and also ensure that its range is accurate and it can accelerate and brake as expected.

Back at 250m from the ISS, the Dragon will wait again before Houston finally says it's allowed into the Keep Out Sphere, an imaginary radius of 200m around the station. Once inside, the Dragon has to sidle up to within just 30m of the ISS and hold again, then to a breathtakingly close distance of 10m, where the ISS crew can grab it with the robotic Canadarm.

Success means the next milestone in SpaceX' contract with NASA has been fulfilled and the company can start thinking about making regular cargo runs to the ISS. On this test trip, the Dragon is carrying extra food, clothing and non-essential supplies for the crew, as well as some sort of secret package.

But it has also ended up carrying something that was never meant to be there, the Aquarius payload of scientific experiments, including spiders and wine.

Aquarius is a cargo of 15 student experiments from the Student Spaceflight Experiments Program and it was supposed to go to the ISS aboard the Soyuz. But because of a failed critical pressurisation test on the Russian ship, NASA moved the experiments to the Dragon instead.

The 15 experiments come from students aged 10 to 20 from high schools and community colleges and include a look at the effects of microgravity on the speed of the wine fermentation process.

There also seems to be a propensity among student scientists to want to send eggs into space to see how they will develop. One experiment will launch Rainbow Trout eggs into microgravity to see the difference between hatching on Earth and in space, while another will send orb spider eggs up in the Dragon for the same reason. ®