Blackbird singing in the dead of night

On March 3, 2010, Martin Fink, general manager of HP's BCS unit, gave a presentation to Ann Livermore, who was running Enterprise Services at the time, and Dave Donatelli, who still runs the company's Enterprise Systems, Storage, and Networking group in which the BCS unit sits.

The interesting bit in that Project Redwood document from Donatelli to Livermore, dated January 14, 2010 – a week before Oracle closed its acquisition of Sun for $7.4bn (net of cash, around $45.6bn). Take a read:

I am waiting for the price tag and schedule on the x86 roadmap. lt will take about 30 days for the team to complete the detailed work. Our first milestone was hit when the team could boot HP-UX on x86 on 12/23. I am expecting an incremental 100 million plus price tag to do the port. As i mentioned before, the engineering road map when I arrived called for the exit from the business. Based on work that Vincent and I have done we have determined that the combined BCSITS earns more than our PC Business. Yesterday I asked NEC to help fund the port. They were quite pleased to learn that we planned on staying in the business for the long term."

The plan that Fink put together for this presentation is incredibly detailed, as it was the one the top managers would be using to make a decision to invest in commercializing a port of HP-UX to x86-based servers and the impact that it would have on the server racket.

The plan required $489m in net investment in fiscal years 2010 through 2014, with x86 Superdome blades (which are under development today through Project Odyssey) costing $255m; the HP-UX port costing $147m; other software such as hypervisors and clustering code costing $24m (some of this is also being done under Project Odyssey today); and performance and ISV testing costing another $128m. HP was also budgeting $70m a year for Intel – to pay for it to fab Itanium chips in fiscal 2010 through 2013.

HP was being fairly aggressive in its plan to get HP ported to Xeon chips and ramp up in the 1+2 plan, as Fink called it. Here's what the server roadmap looked like: 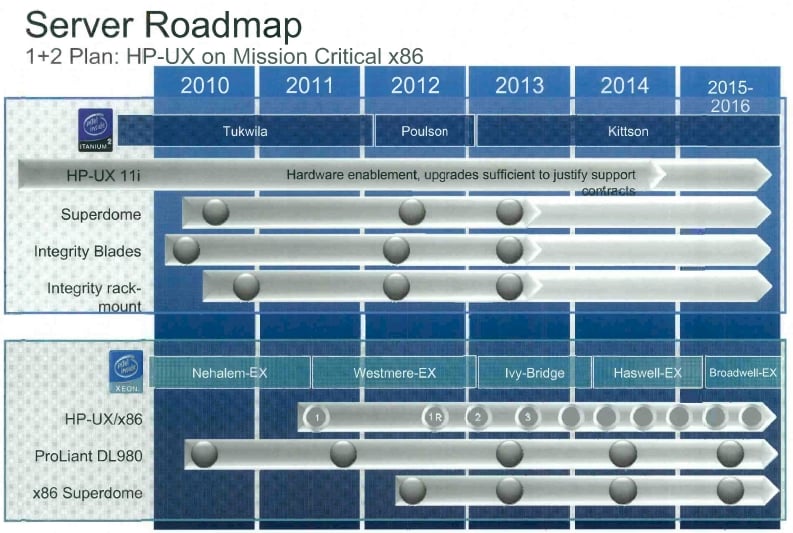 And here's what the HP-UX on x86 server release schedule looked like: 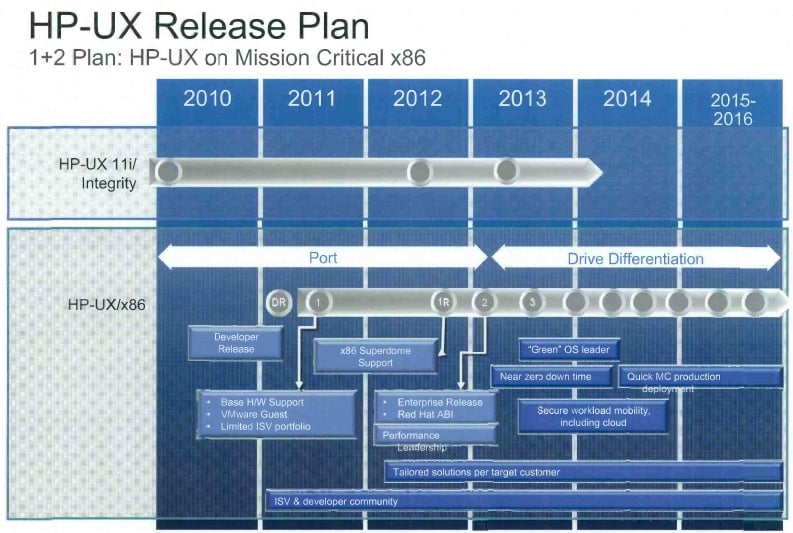 As you can see, those Superdome x86 servers that HP talked a bit about last November were expected sometime around June 2010, in this scenario. HP kept Itanium alive through the "Poulson" and "Kittson" generations out to 2016 with support for a decade after that based on HP's past history.

The HP-UX rollout plan under Project Redwood had updates to HP-UX 11i v3 for Itanium machines in both 2012 and 2013. The developer release for HP-UX on x86 was scheduled for early 2011, and release 1.0 was set to offer basic hardware support as well as the ability to run it within a VMware ESXi hypervisor virtual machine partition. Later in 2012, the HP-UX for x86 machines would be available on the Xeon-based Superdome machines and in early 2013 it got real interesting with an enterprise release and an application binary interface (ABI) runtime that was compatible with Red Hat Enterprise Linux.

This sounded like a pretty good plan. But one of the several CEOs or GMs who oversaw HP between 2010 and now took a chainsaw to Project Redwood. And if that person has not been fired, maybe they should be part of the layoffs that are expected to come this week at HP.

The third plan, which was also a part of Project Redwood, was to take an easier way out and license Solaris and push it on ProLiant iron. This was just fraught with issues, some of them emotional and hence unappealing – and certainly not possible once Oracle seceded to stop development on future Itaniums.

The fourth option in the Project Redwood analysis was to think about baseball and prolong the Itanium lifecycle as long as possible, literally paying Intel $218m to make the Kittson Itanium and another $218m to do a kicker to this chip in 2016. This plan also included getting socket-level compatibility for Itanium and Xeon processors, which is expected as part of the Project Odyssey Xeon-based Superdomes but which has not been confirmed by either HP or Intel.

HP is in a very tough place and has been since it was obvious that Itanium was not going to take over the server world, let alone the desktop. Even if HP did manage to get HP-UX on x86 running (not just booting), once Oracle bought Sun, the odds that Oracle would port its code to this HP-UX on x86 were pretty small.

Oracle already owned a widely regarded Unix that ran on x86 iron – Solaris – and had its own Linux for those who prefer that and Sparc/Solaris and Windows as the final fallbacks. HP-UX would be just another operating system outside of its own control that cost it money to support without necessarily bringing Oracle incremental revenue. Oracle knew this, and HP knew this, and this was probably why HP put HP-UX on x86 in the wood chipper and went with the easiest way out.

That would be Project Odyssey, which means putting Xeons into Superdome iron and beefing up Linux and Windows to be as reliable as they can be while peddling Itanium-based machines as long as possible. And that is just not as much fun as it could have been. ®