From Palm Pilots to high-speed data

Germany's Fraunhofer Institute, best known for developing the MP3 audio codec, runs a photonics lab in Dresden. Earlier this year, it said it had created a wireless optical link capable of delivering data at the rate of 3Gbps.

Fraunhofer's technology isn't true VLC - it uses infrared light. So it has the backing of the IrDA, the Infrared Data Association, the organisation founded in 1993 to oversee device-to-device infrared communications standards. You know, beaming business card details from one Palm Pilot to another, or early wireless printing kit, or even linking a computer to an old Nokia phone as a modem. 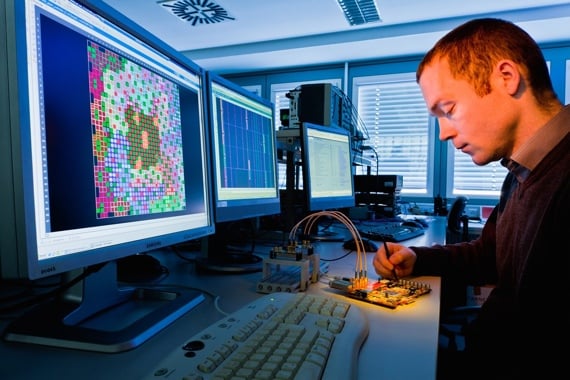 Hardly anyone builds IrDA ports into devices these days - USB, Bluetooth and Wi-Fi are faster and don't require line of sight. But the IrDA is looking to VLC to give it a new lease of life.

At the end of 2011, it pledged to work to define a new standard for 5Gbps and 10Gbps infrared communications, an effort building on the 1Gbps the existing Giga-IR standard supports. The Fraunhofer kit supports Giga-IR.

At these higher speeds, IrDA believes its updated standard could replace the likes of HDMI and USB 3.0.

Meanwhile, Haas, together with Ediburgh University colleague Gordon Povey, continues to work with visible light. They and their team at the college's D-Light - "Data Light" - project have created kit capable of 130Mbps data transfer rights. A lot slower than Fraunhofer's rig, to be sure, but one delivered by off-the-shelf parts rather than custom lab components. Povey and Haas believe they can push that speed to at least 1Gbps. Other Li-Fi proponents claim 10Gbps will be possible with specially designed LED lightsources.

Both boffins also run PureVLC, a company founded to commercialise Li-Fi technology on behalf of the University, and this month PureVLC claimed to have sent the first text message send by LED to an unmodified Android handset. 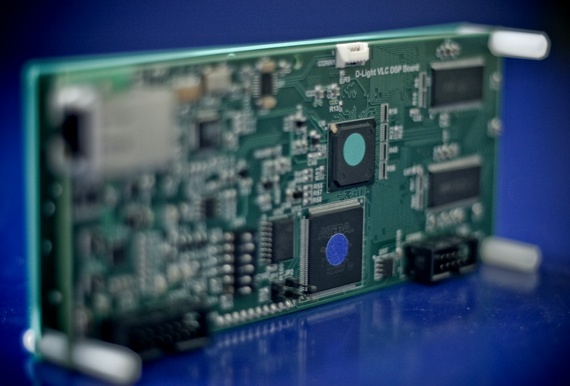 To be fair, the data rate was a low 2.5Kbps and it requires a special app to control the handset's cameras and detect the message. But PureVLC's demo showed that messages can be sent with low-cost kit and that doing so doesn't register with the human eye.