Pic Reg reader Graham Schofield was this morning offered perhaps the most sensational reason for being late to work we've ever seen: an air raid affecting the A4 in west London.

Mercifully for Graham, his Audi's satnav flagged up the conflagration before he got caught in the crossfire resulting from what we assume is a serious breakdown in relations between Kensington and Chiswick: 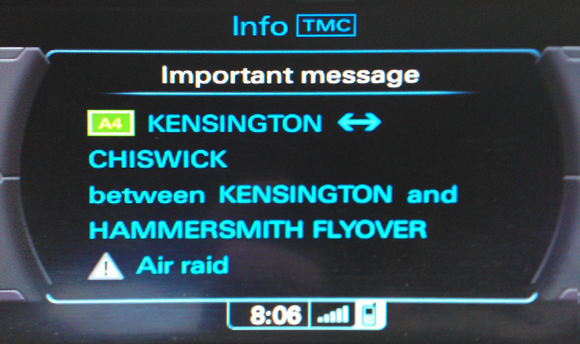 Graham tells us he threw an email at Audi to find out just what's going on, but hasn't yet received a reply. The fact that the German car manufacturer's satnav systems have an air raid warning option points to the possibility that Angela Merkel intends to resolve the eurozone crisis in the time-honoured local tradition.

[We would draw our readers' attention to our previous coverage showing how easy it is to send spoof radio data transmissions which will be picked up by car navigation systems and cause them to display all kinds of notifications, from the humdrum traffic jam to bomb alerts (code 1516) or plane crashes (978) to air raids (1481), bullfights (1456) etc. Full details (pdf) were published by security researchers in 2007 - Ed.]