And the worst film NEVER made is...

Poll result Well, ladies and gentlemen, the time has come to announce the winner of our reader poll to select the worst film never made.

And the winner is... 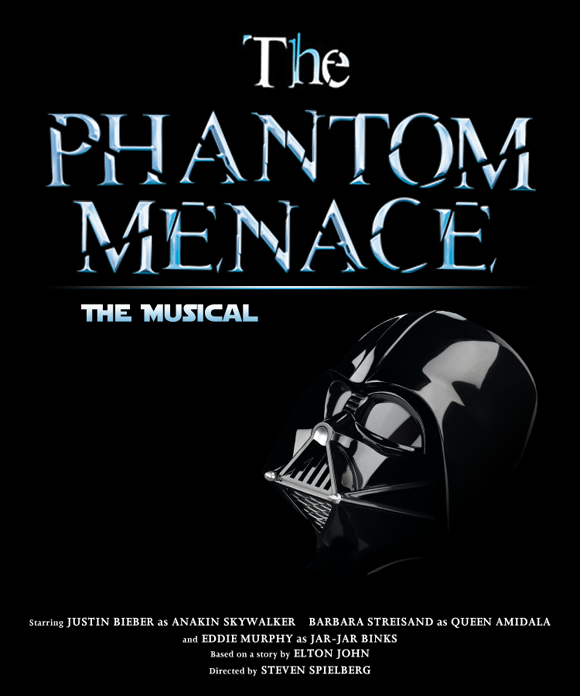 Yes indeed, the nightmarish prospect of Eddie Murphy as Jar-Jar Binks swung the popular vote, with The Phantom Menace: The Musical securing 380 thumbs-up.

For inflicting this imaginary celluloid outrage on the cinemagoing public, GitMeMyShootinIrons has won DVDs of the following, the 10 worst films ever made, as selected by Reg experts:

I'm sure you'll agree a round of applause is in order, before we announce our two runners-up, which are Diana - The 3D Movie!!! (234 votes) and The C Programming Language (222 votes).

For their efforts, Ken Parsons and Jolyon Ralph will soon be enjoying the top five titles from the above list, and a copy of Battlefield Earth, respectively.

As many of you pointed out, we should perhaps have reversed the prize order, with the winner being made to suffer merely John Travolta's Scientology-based tosh.

However, we feel it's only right and proper that GitMeMyShootinIrons has plenty of quality entertainment which he might possibly send to people he doesn't much like.

Thanks to all of you who sent in proposals for the worst film never, all of which merited at least one Razzie. ®

Good work by our own Andy Davies for the above poster. As a reward, he won't be obliged to watch Battlefield Earth.