Open-source handset versus Android and Apple

First came the BlackBerry, bringing the smartphones for suits perfected by RIM to consumers. Next came the iPhone, which quickly hoovered up 23 per cent of the market. But the iPhone came at a price: the freedom of users and coders. It is tightly controlled by Apple, as Adobe quickly found to its cost with Flash.

Next up was Android. In just four years, Android exploited consumers' desire to poke and stroke their phones to become the world's most popular smartphone OS – burying the iPhone – with 59 per cent of the market.

Android had a plus: freedom of choice for both coder and consumer thanks to an open-source code base.

Honeycomb changed things: the Android code was yanked back inside the Googleplex as Mountain View asserted control over builds and contributions.

Since Honeycomb, contributions have only been possible after release – producing a kind of "tah-dah!" open source: here’s the code we made earlier.

But that is no longer a problem for coders; now that Google owns a mobile handset business it's a problem for handset-makers. This is because Google not only has the inside track on what goes into future versions of Android, it also has the handset business, so it can also push out phones ahead of partners like the successful Samsung. 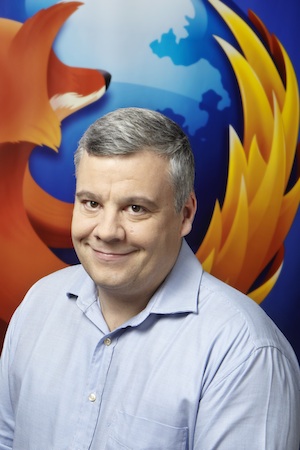 Nitot: web safe on the desktop

Meanwhile, Android has fragmented. Becoming big had a price, as it has been stretched and bent to fit devices with a fiendish variety of screens, chips, cameras and networking. This makes it very hard for developers to build one version of their app that runs everywhere.

This is exactly what happened to Java on handsets, which paved the way for Apple's iPhone and... well, you can see where this is headed.

If only there were a smartphone operating system choice which was open source, not tied to one single commercial operation and which used web technologies already established, rather than tailored to the unique needs of the phone.

Now, there is just such as OS – or at least the promise of one – and it comes from the Mozilla Foundation. Mozilla earlier this year unveiled Boot to Gecko (B2G), a Linux-based operating system that runs HTML5 web apps using the Gecko open-source layout engine used in Firefox, which opens up the phone's onboard systems such as the accelerometer or dialer to the web. It doesn't keep them in reserve for use by native apps or force them through some middle-man software code like Phonegap or Appcelerator’s Titanium. B2G's Linux drivers allow HTML5 code to talk directly to the phone's dialer and accelerometer. Currently B2G runs on Qualcomm ARM and Samsung Galaxy SII and the Nexus. Handset makes and carriers get to customise the interface, too.

Mozilla Europe president Tristan Nitot is bullish about the concept. “Mobility is the key for the web but also for Mozilla,” Nitot told us in an a recent interview at Mozilla's offices in London.

It is key for the web because mobility is the next battleground for openness and innovation on the web. And it's key for Mozilla because it is an ideology committed to a free and open internet, where developers and consumers have choices.

I’d argue, however, that B2G is key to Mozilla for another very important reason: Mozilla needs to get beyond Firefox, which made the group's name and which now seems to have been eclipsed by Google’s Chrome in the battle to challenge Microsoft’s Internet Explorer.

Mozilla has other projects such as Thunderbird and SeaMonkey also on the go, but it’s Firefox that saw Mozilla cross the chasm of recognition to become a real force online, with articles abounding on how Mozilla is the "alternative" to Microsoft.

Nitot told me that he – and Mozilla – see mobility as history repeating itself. presenting an opportunity to liberate people from the dominant giants and deliver something that shakes up the status quo, forcing incumbents to change and innovate. When Mozilla released Firefox in November 2004, it re-energised an ossified browser market that had been dominated by Internet Explorer and it came as Microsoft declared grandly that no more could be done on browser development and that IE would in future be subsumed into Windows. Apparently, a browser that was not standards-compatible and forced the world to view the web though Microsoft's eyes was the pinnacle of evolution. Five years on, Firefox was growing at 40 per cent per year, adding more than 20 million active users as IE began to lose its grip as number one.

“As a citizen of the internet it is extremely scary in that I bought this device and I want to run the software I want. I don’t understand why somebody in beautiful California can tell me what I can and can’t run on this device.” – Mozilla Europe President Tristan Nitot

“On the desktop the web is here to stay; the picture of browsers is healthy,” Nitot said. Mobility is a game in play. “Mobility is a very different story because you have in your pocket a device that’s a computer and you have no control over it. Whether you turn it on or off, the operating system... you don’t know how it’s done [and] depending on the brand you cannot run certain types of applications because the company that controls the app store doesn’t let you run them.

“As a citizen of the internet it is extremely scary in that I bought this device and I want to run the software I want. I don’t understand why somebody in beautiful California can tell me what I can and can’t run on this device.”

He refers not just to the fact you must build native apps, but also to the puritanism and myopic adjudications of the Golden State's app-store police that empowers the smartphone makers as censors.

All very idealistic, but there are hurdles.

Google's Android is the poster child for Linux on mobile but the phone biz is a cruel and hard place for open source. There are rules you must obey; ignore them and you get crushed or ignored into oblivion.

Next page: Obey the rules
Page: