Trainspotters who find the homogenized world of modern locos a bit dull could soon be celebrating the return of steam, if all goes well in a University of Minnesota study.

The university, along with Sustainable Rail International, are to restore a 1930s locomotive – 3463, a 4-6-4 Hudson-type loco built by Baldwin that’s spent its retirement at the Kansas Expocenter in Topeka – as a test bed for bio-coal. The locomotive has already been stabilized prior to the trip to Minnesota for restoration.

If all goes well, the university says, it expects to create the “cleanest, most powerful passenger locomotive”, costing less to maintain and fuel than current diesel-electric locos.

And, since there’s no point in ambitions if you don’t make them big, the consortium also hopes to take the restored loco up to 130 miles per hour (nearly 210 km/h). 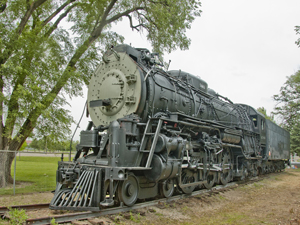 Its biocoal – cellular material processed into a solid fuel – exhibits the same energy density and material handling properties as coal, the university says, but without coal’s heavy metals. The biomass is also carbon-neutral, and produces less ash, less smoke (sorry to those for whom the ‘magic of steam’ includes the smell of burning coal), and fewer volatile off-gases.

The Coalition for Sustainable Rail says its “Project 130” will also produce more horsepower at higher speeds than diesel-electric locomotives.

If the project is successful, they note that the demonstration would also show the value of high energy density biocoal in other applications such as power generation. El Reg supposes then all we'd need to worry about is deforestation… ®