Boffins at Surrey Satellite Technology Ltd (SSTL) have come up with a second zany satellite in their STRaND line, which will use Xbox Kinect technology to hook up with another satellite in space. 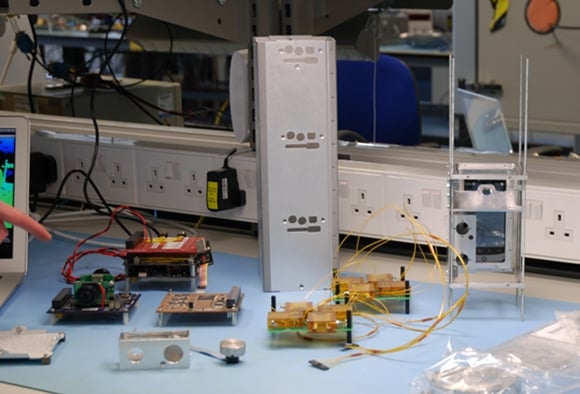 Bits and pieces of the STRaND-1 nanosatellite

STRaND, or Surrey Training Research and Nanosatellite Development, is the company's attempt to use ordinary consumer tech in teeny spacecraft. STRaND-1 has a Google Nexus phone inside and at some point during its time in space, the satellite will try to use the Nexus as its onboard computer.

Consumer technologies would be great to use in spacecraft because companies have already poured billions of dollars into researching them so they're bleeding edge and they'd be cheaper to use.

STRaND-2 is going to use Xbox Kinect tech to see if two satellites can "see" each other in space and hook up with each other. The idea is that the sats would be able to map themselves relative to the other the same way that Kinect broadly sees movement for playing Xbox games. They could then move into position side by side and dock.

Docking systems have never been deployed on such small and low cost missions before, but SSTL wants to try it because, if it worked, it would mean that small sats could be building blocks for a bigger spacecraft. 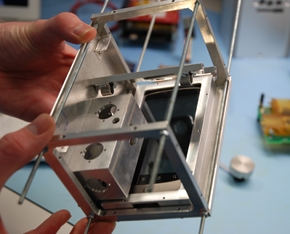 "We were really impressed by what MIT had done flying an autonomous model helicopter that used Kinect and asked ourselves: Why has no-one used this in space? Once you can launch low cost nanosatellites that dock together, the possibilities are endless - like space building blocks," SSTL project lead Shaun Kenyon said.

One example he gave was that the satellites could each carry a piece of a large mirror for optical imaging. Reconfiguring the layout and size of the mirror would then give the camera different choices for different kinds of imaging.

The satellites could also be support for other craft, carrying up spare batteries or upgraded onboard computers or even fly around larger spaceships to inspect for cracks and move to repair them.

Both STRaND-1 and -2 are smaller than shoeboxes and cost hundreds of thousands of pounds instead of the millions spent on other satellites.

STRaND-2 has just started development at SSTL labs and STRaND-1 is expected to launch at the end of this year, although no date has been set yet. Since SSTL has no rockets of its own, it needs a piggyback from an available craft at the right time to get into space, so specific launch dates are hard to come by. ®