Japan to get Android phone with built-in radiation dosimeter

'Think of your children and buy my phone', says CEO

Japan's third network operator, Softbank, has outfitted its latest mass-market handset with a radiation dosimeter, proving that the inscrutable Japanese are just as vulnerable to fear-driven advertising as the rest of us.

"I hope that mothers of children will feel safe by carrying this smartphone" said the operator's CEO Masoyoshi Son during the unveiling, posing in front of, tastefully blurred, aerial photographs showing the devastation caused by last year's tsunami. But the detector isn't a gimmick being sold as an extra, such as the one demonstrated by DoCoMo last year, this will be a standard feature of the latest Pantone handset - the most popular model sold by Softbank (iPhone excluded). 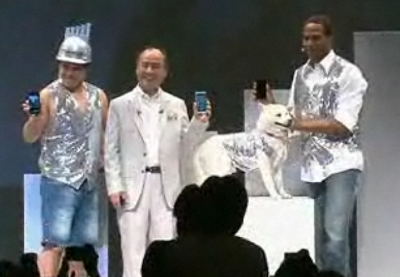 Masoyoshi Son poses with local celebs and another Softbank handset

The Pantone 5 is made by Sharp, and follows a series of feature phones bearing the same name and range of colours. This version is Android based, and has a waterproof coating while remaining small enough to be "comfortable to hold for women, because this Pantone can be carried with one hand while doing something else".

A special button on the front of the Pantone 5 launches the radiation detector, as demonstrated an hour into the operator's press launch, which geo-tags the level in microSieverts per hour and uploads it to the Softbank cloud. There's much mention of the isotope Caesium-137 during the press briefing, but the use of microSieverts/hr suggests that the detector is a dosimeter measuring radiation dose from all sources as opposed to an actual Caesium-137 detector which would be expected to read in Becquerels. That said, any detectable radiation from the Fukushima incident would probably result mostly from the presence of long-lived Cs-137 from the breached cores at this point, so it's not unreasonable to mention the isotope in this context.

Hefty boffinry mag Nature recently reported on a comprehensive study of the Fukushima incident which established the radioactive materials leaked will mean an undetectable increase in cancer rates amongst 170 workers at the plant and no danger to anyone else beyond that - but that's reality while mobile phones are sold on aspirations and (in this case) fears.

The Pantone 5 will sell well in Japan not because there's a real danger of radiation killing anyone, or even because of media-fuelled paranoia: the handset will instead capitalise on the lack of trust between the Japanese people are their government. Fukushima might not have killed anyone but it got people really frightened, and frightened people will buy things to allay their fears.

Softbank says it wants customers to "feel safe", and as long as there are no false positives then the detector will probably help. It’s just a shame that reassurances from the Japanese government don't have that effect. ®