You, media giants, and your digital rights

Analysis They're at it again. Who? Take a guess: if it's not the Daily Mail, then it's probably the BBC. The corporation has once again been caught pinching photos, wrongly attributing them, and pretending nothing ever happened - in a triumph of crowd-sourced "citizen journalism".

But this incident of photo-lifting is slightly more noteworthy than most: the BBC used a photograph taken nine years ago in Iraq to illustrate its story about the massacre at the weekend in Syria.

The photograph, taken in 2003 by photojournalist Marco Di Lauro and licensed to Getty Images, was passed on to the BBC by an anonymous source for propaganda purposes. Casting aside the diligence and thoroughness for which it's known, the BBC simply pushed it out onto its news website, giving the copyright credit to "an activist".

It's the sloppy credit that adds insult to injury as we've noted here before. Associated Newspapers' Daily Mail has been a pioneer in this area: the Mail has previously made attributions on photos such as "© Twitter" and even "© The Internet".

The BBC removed the photo after nine hours, but offered no explanation or apology on its website.

“What I am really astonished by is that a news organisation like the BBC doesn't check the sources and it's willing to publish any picture sent it by anyone: activist, citizen journalist or whatever," an amazed di Lauro told the Telegraph. 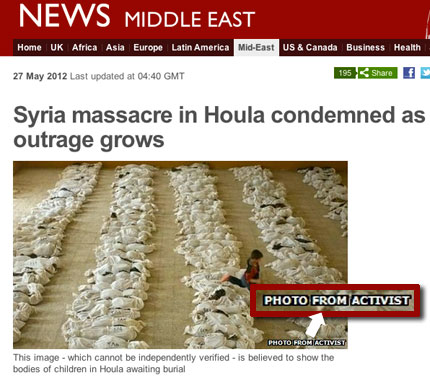 The BBC and the incorrect photo

A spokesman for the BBC told the Telegraph: “We were aware of this image being widely circulated on the internet in the early hours following the most recent atrocities in Syria. We used it with a clear disclaimer saying it could not be independently verified. Efforts were made overnight to track down the original source of the image and when it was established the picture was inaccurate we removed it immediately.”

John Harrington at Photo Business News (a must-read), points out one of several problems highlighted by the story. One is that the BBC's "citizen journalism" experiment isn't working. There was no fact-checking. Many media organisations use photographs and videos, whose veracity can not be confirmed, from conflicts with a boilerplate disclaimer - indicating news organisations would rather be the first, or the most dramatic, rather than right.

It was only a matter of time before another major organisation fell victim to a propaganda stunt.

And, don't forget, yesterday the BBC hilariously illustrated a story referring to the UN Security Council (which is real) using a logo from the sci-fi game Halo of the United Nations Space Command (which isn't).

How do we fix the mindless theft problem?

The Syrian story raises many more troubling issues which threaten the ecology of the creative system, in which the big beasts - such as the Beeb and the Mail - grow fat. Many of the "solutions" offered for copyright snags may actually make things worse.

A quick search using the PicScout image recognition technology - now owned by Getty - would have brought up the source instantly and given the BBC the correct attribution. The Beeb claims that 8,000 staff have attended courses on "sourcing and attribution". Either the team responsible for this cock-up didn't attend - or those teaching the courses need to be fired.

Although photographers have a strong and clear copyright tradition to support them, righting wrongs is expensive and time-consuming in practice. The amount claimed in compensation is typically between £50 and £350, according to photographers' group Stop43.

The 1988 Copyright, Designs and Patents Act established something intended to help creators and inventors: the misleadingly named Patents County Court, which allowed solicitors to take on copyright, trademark and patent cases. But the barrier to justice remains high, and demand for something better is strong.

In December 2009, Lord Jackson completed a review into why justice was so expensive, and identified the cause: legal racketeering across the system. He also commissioned a survey of freelancers and SMEs which found "overwhelming support for both a fast-track (72.2 per cent) and a small-claims forum (78.7 per cent)" and "high levels of potential usage for both these options".

The patent court's users recommended the name be changed to something more descriptive - the Intellectual Property County Court - and that proceedings be limited to one or two days. Lord Jackson strongly backed their recommendations.

Then along came the "Google review", the Number 10 initiative to investigate the effects of intellectual property law on Blighty's industries. It was led by Prof Ian Hargreaves, and this succeeded in taking the momentum out of Lord Jackson's recommendations. Although the prof's review gave a tepid nod of approval to the peer, if you blinked you'd have missed it - and the lord's conclusions were relegated to the marginalia.

In his recommendations for shaking up intellectual property, Hargreaves included a dog that didn't bark: the ability for freelancers to claim "dissuasive" damages against large media companies who steal their work. This means an independent operator is entitled to damages greater than a licence to use the work might have cost, to persuade the offender not to repeat the larceny.

As Harrington points out this week, proposals to relax the protections on orphan works were designed for laudable reasons - to make libraries' historical and cultural archives accessible - but the plans would simply give media giants a Get Out of Jail Free card.

Most of the proposals remove the obligation for the publisher to ask permission first before using someone's work. The publisher would merely be required to perform a "diligent search" - but what constitutes a diligent search isn't clear. Ten seconds of Googling may be enough. And ten seconds of Googling appears to be beyond the scope of BBC or Daily Mail photo researchers.

Technology can find the long-lost parents of orphan works - so proposals backed by Hargreaves are already something of an anachronism. Technology has caught up with the problem and yet it isn't being deployed. Image recognition algorithms are now good enough to identify every photograph ever published electronically - even from poor, down-sampled fragments; Getty's PicScout is the best known, and Google and Facebook have developed their own too.

Providing an online image exchange that collates commercial picture libraries, individuals' private work, and even Creative Commons collections would make arguing over what constitutes a "diligent search" moot. This kind of "eBay for photo rights" would allow publishers and individuals to find pictures fast. And while Hargreaves borrowed the idea, he sketched a universal exchange for all kinds of rights across all industries.

For media giants such as the Daily Mail and the BBC however, it's hard for even the most fair-minded correspondent to cut them any slack. They're incredibly well-resourced organisations. The Mail recently overtook the the New York Times as the most read newspaper website in the world; it makes great use of photography and owes much of its phenomenal popularity to those visual images.

The BBC, for its part, invites the public to send in images (for which viewers don't get paid) and then systematically turns the images into orphan works in clear violation of the 1988 Copyright Act. Both need bringing into line. Unless there's a stick alongside the carrot of a photo exchange, with a penalty regime in line with the Finnish driving penalty - the richer you are, the more you pay - it's hard to see them taking much notice.

It's fashionable to call for the weakening of creators' rights, and Hargreaves was merely reflecting the view of his academic contemporaries, and some of the dark fringes of the internet, that copyright is a bothersome regulation. This is usually dressed up under the weasel-phrase "liberalisation".

But the BBC "citizen journalism" saga casts it in its true light. Thanks to technology lowering the costs of production and distribution, we are all creators now, and we need our rights protecting against their unauthorised, unpaid use by media giants - who want to use our work for no cost and at no risk.

Weakening these rights isn't "liberalisation", and it doesn't create a liberal society - it's exploitation, and the society that this will create will be indistinguishable from feudalism. ®

One of the most farcical elements of this story is that the BBC likely had the rights to use the image; most major news organisations have pretty comprehensive Getty licences ... As far as it knew, however, it might just as well have been using a nicked pic. – Ed