Review Fedora 17 arrived on Tuesday following a three-week delay. Nicknamed Beefy Miracle, the Fedora Project promised "over and under-the-bun improvements that show off the power and flexibility of the advancing state of free software".

That's a bold claim for a package with such a ridiculous name. While this is a solid update with significant enhancements under the hood and the latest version of the GNOME desktop, there's nothing particularly miraculous about it - just as we concluded in the review of the beta build.

A miraculous Fedora 17 would have included full support for Btrfs - the kernel at least supports the filing system - but that's going to require a major rewrite of the Anaconda installer interface and has been postponed until at least Fedora 18.

A miraculous Fedora 17 would also have somehow wrangled the full complement of GNOME apps into supporting the new application-level menu in GNOME 3.4. Impossible, you say? Fedora has almost nothing to do with development of GNOME apps? Exactly, but it certainly would have been miraculous if Fedora has done pulled it off nonetheless.

Instead we have a very nice new version of Fedora that, while not miraculous, is well worth grabbing, especially for those of us still trying to adjust to GNOME 3.

GNOME 3.4 continues to polish GNOME 3, particularly the Shell where the search features have improved significantly. Results appear much faster and the Shell is much better at guessing what you want. It does not, however, show results for applications that are in the repos but not yet installed, a nice new feature you'll find in the latest version of Ubuntu's Unity search tool.

GNOME 3.4 also introduces the aforementioned application-level menu that sits in the GNOME Shell bar at the top of the screen and lists actions and options for the program running in the foreground. The application menu pretty much mirrors a very similar feature in Ubuntu's Unity interface, but unfortunately not all applications use the new menu yet, making GNOME 3.4 feel a bit unpredictable and more inconsistent than previous releases. 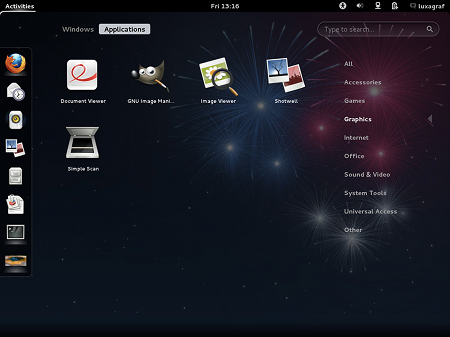 The application menu screen guesses the GNOME apps you want

Naturally, non-GNOME-specific software - such as the platform's web browsers - don't support the app menu, or if they do the only menu item is Quit. Unfortunately it's entirely possible that such apps, coming from well outside the GNOME world, never will support the new menu. Of course, if user interface consistency is your highest priority then you probably aren't using Linux anyway.

The GNOME devs have put a good bit of effort into polishing the desktop user interface where they can, though. The 3.4 release includes smooth scrolling support and some redesigned applications, such as the Documents and Contacts apps, both of which now have a streamlined look that's more in line with the GNOME 3 human interface guidelines.

Despite this work on the interface, GNOME 3 updates still feel like two steps forward, one step back. There's the might-be-there, might-not app menu to keep you on your toes and even the improved scrolling brings with it smaller scrollbars that are hard to grab. So while the scrolling may be a joy, for some users it may actually be trickier to scroll.

On the plus side, Fedora 17's GNOME 3.4 can now run on hardware without need for a native 3D driver. The gnome-session app will no longer treat llvmpipe as an unsupported driver, which means the GNOME 3 interface will work without issues in virtual machines. 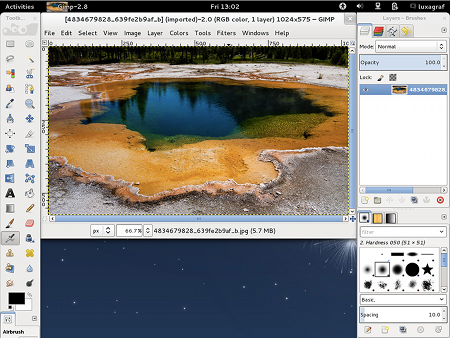 The GNOME application stack has been updated for this release with Fedora 17 shipping with the latest versions of the Evolution mail client, Firefox, Shotwell and others. The biggest news though will no doubt be GIMP 2.8, which brings the long awaited single-window mode and gives the graphics editor a more Photoshop-like look and feel.

Next page: The meat inside the beef stew
Page: