Measure up your applications for their move to the cloud

Preparing for a new life

Are you ready to get your applications into the private cloud? If you understand the difference between virtualising something and making it part of a broader environment, then you are on your way.

If you have explored the business value of each application to see if it makes sense, you are further still. But now comes the heavy lifting.

How do you get your applications from their current home into your new private cloud?

One of the simplest ways to move an app is simply to forklift the whole thing over to the private cloud infrastructure, knowing that you will sacrifice some functionality in the process.

This makes sense for some software, especially groups of applications that are heavily dependent on each other. It reduces risk and effort because you won’t leave anything on dedicated hardware, and you will require few changes to your binaries.

You could also choose to pick out specific applications within a group, while leaving others in place. Sometimes, groups of apps naturally separate themselves this way.

A group of batch processing apps supporting a web-based enterprise app might be perfectly happy sitting on their own hardware while the web app moves across. On the other hand, you may not get the full elasticity of the cloud after the move.

Different applications need different transformation strategies. Consider the application’s architecture, what it is currently running on, how many other applications it depends upon and how tight those interdependencies are. 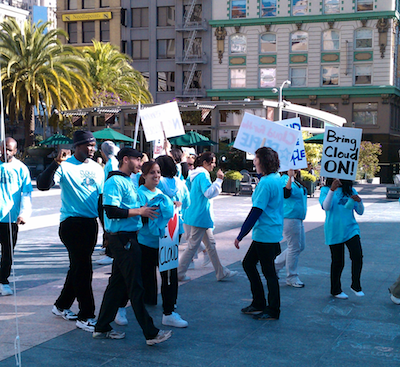 The smart company will document not only its application base but also the process flow that the applications support. Dependency mapping is an important part of this process.

Applications supporting the business workflow are dependent on each other in different ways. They require each other's output and various steps during business processes, and these inputs and outputs should all be understood and recorded.

When mapping dependencies, don’t forget security. Your evaluation of an application should include its security risk and an analysis of what data it stores and where.

These parameters play a vital part, not only during the design of the private cloud architecture but also during the scheduling of the migration process, which may take place over several iterations.

Applications must be profiled so that the design team can allocate the proper resources during the migration.

When profiling the application, allow enough time to watch for fluctuations in data. You should be able to see whether the application is used more at some times than others and how volatile those changes are.

Explore the application’s latency requirements. How quickly does it expect a response? Can such a response be guaranteed in a cloud computing environment, and does the deployment team have the tools and expertise to ensure that the application meets service level agreements for latency?

This latency issue also determines which applications move together. Applications that rely on low-latency connections with each other should probably be moved together.

Make sure you evaluate an application’s available needs too. This is a particular issue for fault-tolerant legacy applications. Can the cloud migration team ensure that the application will meet service level agreements for guaranteed uptime?

Multi-tiered software consists of a server back end, a client interface and a layer of application logic in the middle.

These are often designed with a high level of interactivity. They are often compute-intensive and may use component-based messaging via standard interfaces such as SOAP or other XML-based protocols. Often, multi-tiered software is written atop a portable software framework, such as Java or .Net.

Many batch applications may be legacy based, produced as native executables designed to run on specific hardware.

Standalone desktop applications may be the hardest to transport to the cloud. They are highly interactive, but aside from a few specialist applications such as graphics-intensive software, they are not computationally demanding.

Unlike multi-tiered applications, there is a tight bond between back-end processing and the user interface. They are not designed to be accessed by many users at once, and specialist multi-user software frameworks may be required to make them functional in the cloud.

When considering high-performance computing and analytics applications for private cloud migration, look at their architecture. They generally fall into one of two camps: scale up or scale out.

One of the biggest challenges for virtualised infrastructures is network I/O, meaning that the design team must compensate by throwing more resource at the problem.

The prevailing application types in your portfolio determines the cloud models that you choose. For example, multi-tiered applications could be relatively easy to migrate because each tier can be taken separately.

The web services messaging mechanisms used by many such applications make it possible to create loosely coupled architectures to support the software. The data management tier could be virtualised independently of the business logic tier, and may even be scheduled separately as part of a staggered rollout.

Legacy batch processing applications can be among the most challenging to migrate to cloud-based architectures, as they may not support older hardware platforms and operating systems. Nevertheless, there are some available options.

The most revolutionary, but possibly the most effective in the long run, is simply to migrate the old application to a new, open hardware and software architecture. This involves re-writing software and entails the biggest investment.

An alternative is to wrap the hardware in a virtual machine, if one can be found to sit atop a virtualised infrastructure.

Finally, consider leaving legacy software as it is and simply accessing it via a service interface from a cloud-based system. Some battles are best avoided altogether, especially if the risk involved in migrating a particular application is too great.

Organisations also have different options when migrating client-based applications. Virtual desktop integration entails providing each user with a single virtualised PC, hosted on the server. This can be computationally expensive.

Session virtualisation shares a single desktop environment among many users who share access to the desktop and the applications. This can reduce management headaches while making software licensing and capital expenditure on server hardware less expensive.

If done correctly, due diligence helps deployment teams to tackle a challenging process and achieve a migration that results in lower costs, increased agility and a more efficient environment for enterprise applications. ®