Getting physical as well as virtual

Blade server and virtualization upstart Egenera has been gradually transforming itself from a hardware vendor to a management tool maker, and with its latest round of software is leaping from virtualized blade servers to the clouds while at the same time extending the capacity of blade infrastructure it can manage.

The secret sauce of the original and subsequent BladeFrame blade servers was the Processor Area Network Manager, a tool that virtualized virtualize and managed resource pools running on a frame filled with two-socket and four-socket x86 servers plus switches and storage.

PAN Manager could virtualize the bare metal and abstract it into pools without going all the way to a server virtualization hypervisor like VMware's ESXi, Red Hat's KVM, Microsoft's Hyper-V, or Citrix Systems' XenServer. As these hypervisors took off, PAN Manager was updated to control them as well as carving up resources on bare metal x86 iron.

Over the past several years Egenera has worked with Dell, Hewlett-Packard, IBM, NEC, and Fujitsu to get PAN Manager certified to work across their respective blade servers, which is 98 per cent of the blade server market. But at the moment, PAN Manager is not certified to run on rack-based servers from these vendors, who control the volumes in the rack space as well, which represents about 60 per cent of server volumes.

"We see the rack volumes, and we see the opportunity they represent," admits John Humphreys, vice president of marketing at Egenera, who knows that many customers want to be able to pick hardware separately from the management software that controls it. But Egenera is not yet willing to divulge its roadmap to rack servers.

In the meantime, as it has hinted to El Reg it would do, Egenera is boosting the scalability of PAN Manager so customers can build bigger blade server pools and mix and match iron from different vendors in those pools.

PAN Domain Manager, which is released this week, significantly increases the scalability of PAN Manager. Up until now, a single instance of PAN Manager could manage up to four blade server enclosures, which depending on the make and model of the blade chassis could end up being somewhere between 50 and 64 blades.

PAN Manager doesn't just create a pool of processor, memory, storage, and I/O resources across the blades in those enclosures, but also does automatic failover of workloads if hardware goes on the fritz.

With PAN Domain Manager 1.0, which ships in the third quarter, Egenera is federating up to 16 blade enclosures underneath a single instance of PAN Manager, allowing between 200 and 256 blades to be managed as a single entity and to provide capacity for disaster recovery and failover.

The tool also has the ability to use LPANs, the logical processor area network construct that was at the heart of the original BladeFrame machines designed by Egenera, to provide isolation between resource pools and therefore allow secure multi-tenancy. The LPAN is like a software container and it offers pools of capacity with their own security as well as a virtual switch environment that exists below the PAN Manager layer.

There is one important limitation with PAN Domain Manager 1.0 in that all of the iron in the domain has to be the same. With PAN Domain Manager 2.0, due in the fourth quarter of this year, customers will be able to mix and match blade servers from multiple vendors – provided the machines are certified to run PAN Manager, of course – and also be able to shuffle workloads across the pool regardless of the differences in the underlying iron in the machines. (That last bit is the hard part.)

Also coming in the fourth quarter is an update to PAN Manager, currently at the 7.2 release level, that will allow failovers at the LPAN level as well as many-to-one disaster recovery. With the current PAN Manager, when you do a failover for a server, you have to failover an entire chassis from production to target machines. This is clearly annoying, particularly if some of the workloads are not mission critical running on some of the blades. The new failover method works at the LPAN or individual server level.

This new functionality is key to Egenera's plan to take on VMware when it comes to disaster recovery while still supporting its ESXi hypervisor from PAN Manager. The updated PAN Manager coming later this year will have a plug-in for VMware Orchestrator that will allow for VMware shops to incorporate PAN Manager workflows into their ESXi environments. 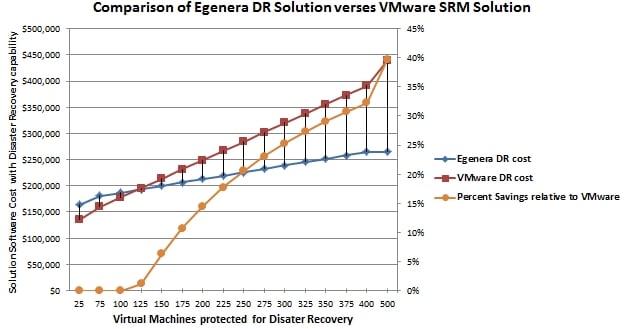 Egenera, which sells its disaster recovery code as part of the the high-end PAN Manager Enterprise Edition, is positioning it against VMware's Site Recovery Manager (SRM) add-ons for the vSphere management stack and the vCenter console for ESXi.

None of this software is cheap, mind you. But neither would be the army of techies that would be required to do this kind of management manually. In fact, you could argue that given the speed at which disaster recovery needs to take place and the fluid nature and complexity of virtual servers, this management cannot be done manually.

PAN Manager Advanced Edition costs $4,500 per blade and Enterprise Edition costs $6,500 per blade, and as you can see from the chart above, VMware has the advantage in terms of price for 25, 50, or 75 blades. The cross-over point where PAN Manager Enterprise Edition and the VMware stack with SRM is 100 blades, and beyond that the gap just widens until at 500 blades, PAN Manager is 40 per cent less expensive than VMware SRM, according to Humphreys.

Reaching for the heavens – and the cash

Having virtualized server, storage, and networking as well as supporting various hypervisor layers atop LPANs and hooked into PAN Manager and now PAN Domain Manager, Egenera is reaching for the clouds, both public clouds managed by service providers and private clouds set up by enterprises.

With PAN Cloud Director, Egenera is expanding out and allow cloud builders to orchestrate the creation of cloudy resources in conjunction with PAN Manager and make them available through a self-service catalog. The PAN Cloud Director also includes resource metering and chargeback tools for keeping track of who is using what resources and making sure they pay the bill. The service catalog is white labeled so a service provider can slap their electronic branding on it.

If the service provider or enterprise uses any of the blade servers supported by PAN Manager from the big five server makers, then they can do bare-metal provisioning on that iron as well as provision virtual machine instances – something that most other cloud fabric controllers can't do. The assumption, and an incorrect one at that, is that no one will ever need a bare metal server again.

PAN Cloud Director can provision any of the popular hypervisors onto blade iron, including ESXi, Xen, KVM, and Hyper-V. If you want to use rack-based servers (which do not have integrated switching and therefore cannot be virtualized at the hardware level by PAN Manager) then you lose the ability to provision bare metal servers. But you can provision hypervisors and VMs on top of them with PAN Cloud Director. 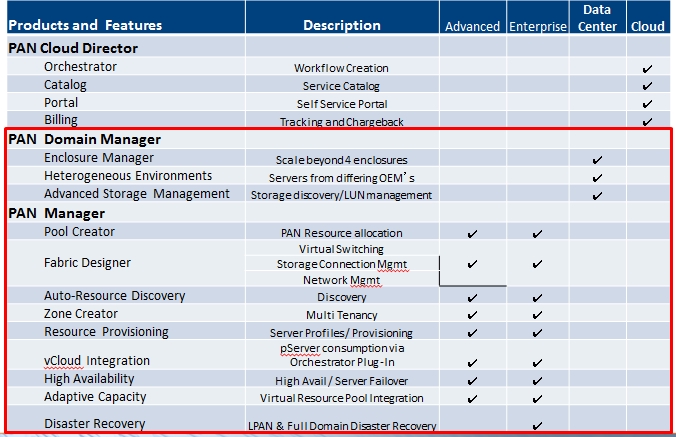 The user interface for PAN Cloud Director was developed internally by Egenera and is written in Java, as was the billing and chargeback system, which shows admins and users working from the self-service portal exactly what it will cost as they assemble virtual or physical stacks.

You need the console from the appropriate hypervisor for PAN Cloud Director to plug into to provision and manage the virtual machines, so don't think you can get around paying for vCenter if you want to manage clouds based on ESXi.

Egenera is supporting the open source Xen 4.0 hypervisor and PAN Cloud Director can reach right into it to control it; it hooks into Systems Center to manage Hyper-V. Support for management of KVM is due before the end of the year, and it is not yet clear how Egenera will do that.

The interesting thing with PAN Cloud Director is that the one thing you don't need to do is pre-provision a hypervisor on servers ahead of time to be able to slap VMs on it quickly. The cloud control freak and call up and provision the hypervisor on the fly and then the VM console is none the wiser that it wasn't all done ahead of time.

PAN Cloud Director costs $2,500 per blade and is available now. ®

All these worlds are yours, except Europa. Attempt no landing there. Use them together, use them in peace
Science29 Jun 2022 | 18