iOS App of the Week The Inland Revenue’s latest on-line tax calculator fell flat on its face when it was launched last week – swamped, no doubt, by starving millionaires desperate to know how much their 5 per cent tax cut was worth. 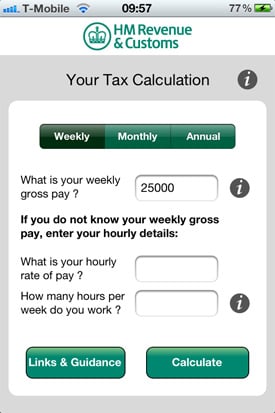 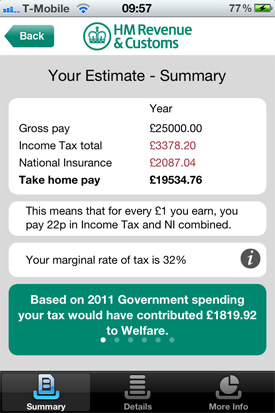 And even when it was up and running again the on-line calculator didn’t want to play nice with Safari on my Mac. However, the calculator has also been launched as a free app for both iOS and Android, and it’s interesting to fire it up and get a quick breakdown of how your tax bill works out.

You can enter your salary or hourly rate, and then just hit the Calculate button to get a summary of your income tax liability, national insurance and final take-home pay – along with the life-sapping news that tax and national insurance together amount to a ‘marginal rate’ of 32 per cent even for basic rate taxpayers. 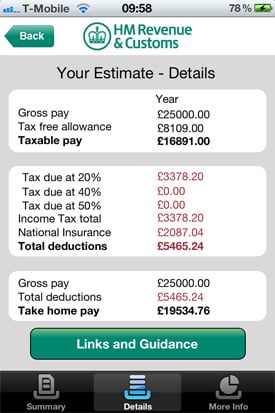 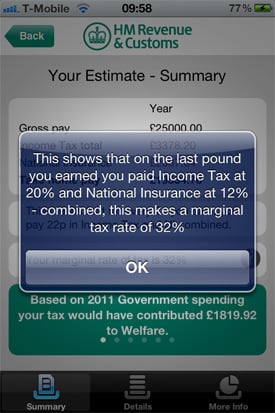 If you want to know more, then the Details button drills a little deeper and provides additional information, such as your personal tax allowance and the amounts taxed at the 20, 40 and 50 per cent rates. And, just to make you feel better about your tax bill, there are a couple of pretty little pie charts that show how your money is being spent.

Some people might suggest that spending 33 per cent on unemployment and welfare and barely 5 per cent on ‘infrastructure and industry’ helps to explain the lack of growth in the UK economy. But hey, what do I know? I only live here. 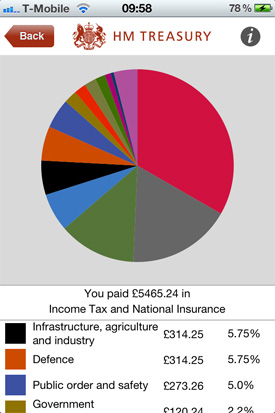 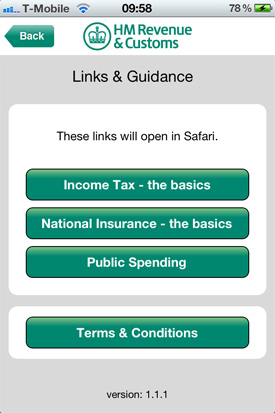 Where it all goes and external links

The app itself is pretty straightforward, but my main complaint is that it’s primarily designed for employees on PAYE, with no option for self-employed people, such as myself, to deduct travel and other expenses. However, the app does provide links to the HMRC web site where you can get more info for self-employed people and small businesses.

Back in January, I was utterly traumatised by the task of filing my tax return on-line for the first time, and I would have liked to have had this app available back then. It won’t do all the calculations for you – there are plenty of paid-for apps that can do that – but it does give you a useful starting point so that you can work out the key numbers that explain where all your dosh is going. ®