Windows 8: Not even Microsoft thinks businesses will use it

Analysis Like Thelma and Louise, executives at Microsoft's Windows division have no doubts about which direction they want to point the car. It's pedal to the floor, and over the cliff as fast as they can drive.

Last week the latest Windows 8 public preview confirmed what many had expected and feared: there will be no compromise on the schizophrenic user interface behaviour Microsoft is forcing on users.

As I wrote in March, the problem isn't the tablet-friendly Metro layer per se. It's the severe disruption to the everyday experience caused by integrating Metro front and centre. The start menu has gone, but pressing the Windows key now throws the user into a radically different environment with a completely different design, behaviour and even scaling.

Having encouraged us to hit the Windows key much more often in Windows 7, Microsoft now punishes us every time for it. I cannot think of a change forced upon users that's quite so violent since character-based terminals gave way to graphical user interfaces. So Metro isn't the problem: catapulting into Metro land (and back again) is.

"When I described my experience of Windows 8 to my father, he suspected that the Microsoft execs were preparing to jump ship in an Enron-type fiasco. This strikes me as a real possibility. If it happens, I'll miss Microsoft," writes one guinea pig.

In other words, Microsoft has a catastrophe looming that dwarfs Vista. The new system requires fresh training, and additional support costs, which are to be piled on businesses while much of the market is in a recession. It offers few benefits.

Back in March I speculated whether Microsoft really appreciated the gravity of the situation, and assumed that they did. We therefore had to infer that Microsoft was prepared to forego a Windows enterprise upgrade cycle simply to put the Metro onto the market.

And apparently, it is. Quoting no sources, blogger and news editor Paul Thurrott writes that Microsoft is indeed giving business users a miss.

"I believe that the software giant is taking a pass on businesses for this release, a calculated risk that enables it to more firmly focus on the consumer market that's on the cusp of slipping through its fingers thanks to Apple and, to a much lesser extent, Android," he writes. Well, you read it here first.

It's expressed as a belief, but we must assume Thurrott is well-informed. 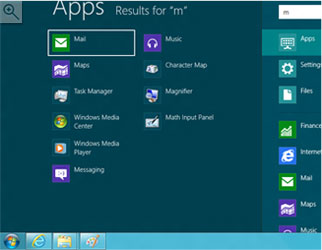 Third-party fix Start8 brings a bit of sanity back

"The fact that managing Win 8 is essentially the same as managing Win 7 doesn't matter... the Windows 8 Metro UI is completely unfamiliar, and for us would be a support nightmare," we hear from one enterprise buyer.

Elsewhere Thurrott points out that half of enterprise desktops still run XP, and Microsoft won't withdraw support from XP until April 2014: "Simply telling enterprises that they can and should skip Windows 8 - or at most roll out Windows 8 in a Windows 7-like configuration alongside Windows 7 - would be cheered by Microsoft’s biggest customers."

This small flurry of articles all point to the channel and partners being softened up. But skipping an enterprise cycle is quite a gamble. I wonder if it's really necessary?

Much of the rest of Windows 8 has been well received. It's pretty good news for many users, being leaner and faster than before. If you want your OS to be a minimal run-time for your applications - this is a step in the right direction.

All Microsoft really needs to do to engage its enterprise customers is drop the Maoist insistence on forcing users into a violent context switch. It can unbind Metro from the Windows key, and for now redesign the Start Menu so it looks something like Start8 (a third-party fix, pictured above).

This makes Windows 8 an evolutionary step without the radical behaviour disruption that it is today. Alas it's neglected many enterprise-grade features in the rush to bolt the new platform onto Windows - as Kieran Cummings wrote here.

Time to bet on an "Enterprise Edition" sometime early next year, perhaps? ®