The US Navy has signed off on a $27,883,883 contract from military contractor Raytheon to install Linux ground control software for its fleet of vertical take-off and landing (VTOL) drones.

The contract covers the Naval Air Station at Patuxent River in Maryland, which has already spent $5,175,075 beginning to install Linux systems. The no-bid contract was awarded to finish the work and get the Navy's drone fleet fully operational using a Linux backbone.

The Navy's only listed VTOL drone is the Northrup-Grumman MQ8B Fire Scout, which is designed to be carried by frigates and to provide electro-optical and infrared reconnaissance over a range of 110 miles, while allowing five hours on station. The Navy plans a fleet of 168 of the drones; some are currently deployed scouting-out drug shipments in the Caribbean, but can also be fitted 70mm rockets as needed for other missions. 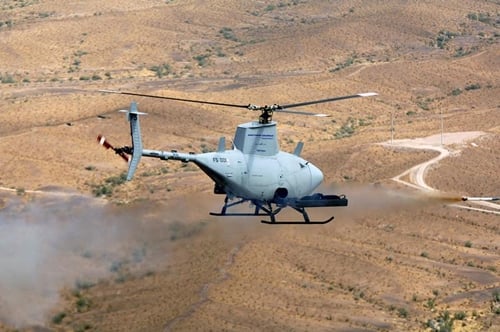 While the US military has been a growing user of Linux, the contract might also have something to do with the swabbies learning from the mistakes made by the flyboys and girls in the US Air Force. After a malware attack on the Air Force's Windows-based drone-control system last year, there has been a wholesale move to Linux for security reasons.

"If I would need to select between Windows XP and a Linux based system while building a military system, I wouldn't doubt a second which one I would take," F-Secure's security researcher Mikko Hypponen pointed out at the time.

As for those worried over GPL licensing, the US Department of Defense is well ahead of you. The DOD has already issued guidelines on the use of open source code in its systems, and says the matter is in hand.

"The US government can directly combine GPL and proprietary/classified software into a single program arbitrarily, as long as the result is never conveyed outside the U.S. government, but this approach should not be taken lightly," it states. "When taking this approach, contractors hired to modify the software must not retain copyright or other rights to the result (else the software would be conveyed outside the US government.) ®