‘No matter how you look at it, we did it’

A study published last weekend on Nature Climate Change claims to give the lie to the notion that if the world is warming, it’s not our fault.

With the kind of certainty that will send the Heartland Institute reaching for Plan C (“the world should focus on mitigation”), the study, The study, Human-induced global ocean warming on multidecadal timescales, ends with the bald factual statement: “We have identified a human-induced fingerprint in observed estimates of upper-ocean warming on multidecadal timescales”.

Alternatively, as oceanographer Professor Nathan Bindoff of the University of Tasmania put it speaking to the Australian Broadcasting Corporation: “No matter how you look at it, we did it”.

The study, with inputs from Australia, Japan, India and the United States, found that natural variability in ocean temperatures could only account for ten percent of the observed rise – at most. Event the “noise” created by short-term variability would have to be twice as great as is observed to make any change to the study’s results.

“Although we performed a series of tests to account for the impact of various uncertainties, we found no evidence that simultaneous warming of the upper layers of all seven seas can be explained by natural climate variability alone. Humans have played a dominant role,” said Lawrence Livermore climate scientist Peter Gleckler.

The CSIRO’s Dr John Church, a co-author of the study, told the ABC that the new study compared observed ocean temperature changes to “a dozen different models used to project climate change”, making it “the most comprehensive study of changes in ocean heat content to date.”

Previous detection and attribution studies mostly focused on a single observational data set (for example, focusing on the Atlantic ocean alone), comparing that to “one or two” climate projection models.

The new study draws on observational data from all the world’s major oceans and compares observations to a large number of models, projecting changes with and without the impact of greenhouse gases.

The main outcome of this study isn’t identifying a new trend. Rather it provides an analysis that’s both more extensive and more accurate than previous work. 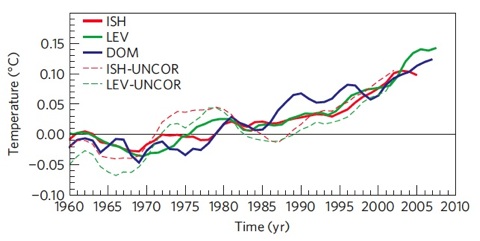 With or without XBT bias correction, the Levitus (LEV) and Ishii (ISH) data show the warming trend.

The new study, published in Nature Climate Change concludes that the change in

global ocean heat can’t be accounted for without human activity.

The authors identify two key factors that needed to be taken into account in assessing the observational data. One is that they needed to correct a “systematic instrumental bias” in the expendable bathythermographic (XBT) data collected since the late 1960s. The other was to take into account the impact of volcanic activity on shorter-term data.

“When global mean changes are included, we consistently obtain a positive identification (at the 1% significance level) of an anthropogenic fingerprint in observed upper-ocean temperature changes, thereby substantially strengthening existing detection and attribution evidence,” the report states.

The abstract of the report can be found here.®