iPhones, iPads to be FULL OF FACEBOOK and NOT GOOGLE

If you're harboring any doubts about bad blood bubbling between Apple and Google, Cupertino's iOS headman Scott Forstall dispelled them on Monday when introducing the next version of Apple's mobile operating system, iOS 6.

"They released a dairy product, 4.0, about the same time that we released iOS 5," Macworld quotes* Forstall as saying during his keynote presentation at Apple's Worldwide Developers Conference in San Francisco as he introduced a slide showing Android's fragmentation and old-version persistence versus Apple's iOS 5 predominance.

Forstall then went on to reveal, as expected, that Apple was leaving Google Maps behind and including its own homebrewed Maps app, complete with turn-by-turn navigation with real-time traffic updates and rerouting suggestions.

In addition, the Maps app is vector-based, making zooming and rotation smooth and seamless – and making Google Maps look oh-so last decade – and supporting a 3D Flyover mode with real-time rendering of buildings in select locations.

Unfortunately for owners of older iOS devices, Flyover and turn-by-turn navigation will be available only on the iPhone 4S and iPad 2 or later. 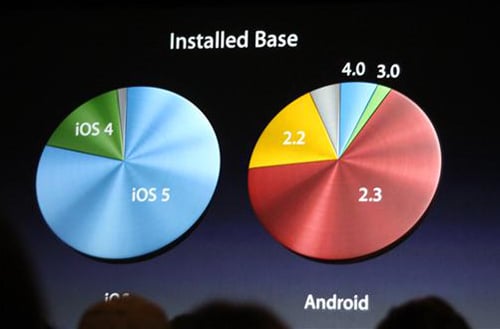 According to Apple, most iOS devices are up-to-date. Android, not so much (image: AppleInsider)

In addition to his digs at Google, Forstall also unveiled a raft of new features in iOS 6, a beta of which was provided to developers on Monday, and which will be released "this fall" for the iPhone 3GS and later, second- and third-generation iPads, and the fourth-generation iPod touch:

All in all, Forstall said, there will be 200 new features in iOS 6 – many, of course, being either tiny or so deep in the OS that they'll be of interest only to developers. Others, such as expanded accessibility features and what appear to be vastly improved Chinese-language capabilities, are targeted at specific markets.

What's also clear is that iOS 6 is also targeted at a specific mobile operating system and "dairy product" developer that happens to be located in Mountain View, California, exactly 8.9 miles north of Apple's 1 Infinite Loop headquarters, according to Google Maps. ®

* We have no reason to doubt Macworld's quote, but we do want you to know that we are unable to verify it. Y'see, for its own unstated reasons, Apple doesn't allow The Reg to attend its events, so we weren't there to hear Forstall's snarkiness in person.