World+dog discovers hi-res aerial maps, thanks to Google and Apple

While I’m happy to join in the general outrage about intrusions on our privacy, the metaphorical 72-point front-page headlines about Google and Apple display a deep ignorance about the existing, common, mundane uses of aerial imaging.

When people add the words “military”, “grade”, “spy” and “imaging” into a story also containing the words “Google” and “Apple”, the main game is to sprinkle some search engine optimization fairy-dust into the piece as a hit magnet and/or click-collector thanks to a scary headline.

Here's an example: Apple and Google, trying to out-map each other, are reportedly seeking “military grade” kit (says the Daily Mail and others) for aerial photography “able to scan objects down to four inches wide” (as ZDNet puts it), taken by “spy planes” (thank you to Tech2).

Is it instrusive? Certainly. Is it smart for a serial privacy invader like the Chocolate Factory and a conscienceless monolith like Apple to race each other to find nude sunbathers in their own backyards, all the world over? Certainly not.

Is it new technology? Nope. Is your place already in a high-res map captured with high 3D accuracy? Almost certainly.

If you don’t believe me, head to the NSW Department of Lands and take a look at the aerial photographs that already exist for the completely mundane purpose of survey information. Or, if you don’t want to do that, look at the photo that I downloaded. 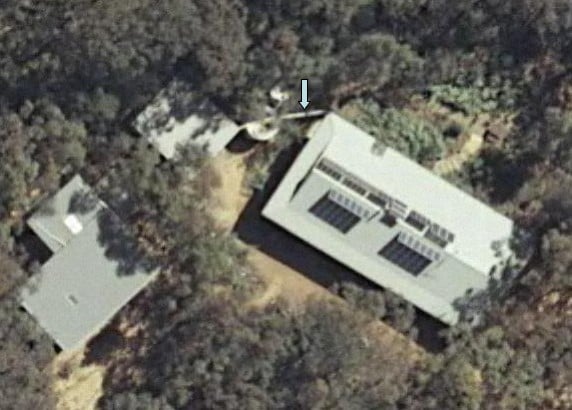 Arrow indicates a four-inch feature captured in an aerial photograph available to the public.

I haven’t invaded anybody’s privacy: as you can see, there are no humans in the photograph, and anyhow, it’s my house and I figure I can publish this pic as long as I respect the Department’s copyright (permission is given when you access the system).

In this quite mundane photograph, there’s an object “four inches wide” or thereabouts. I’ve even provided a pointer in the pic: a pipe running from the gutters to the water tank, and it’s about four inches wide.

(Note: this image has been shrunk to fit this page).

What about the other exciting angle to the story, that all this “military grade” stuff is going to build 3D models of cities?

Take a read of this, which describes LIDAR capture of Australian coastlines, to a vertical resolution of 10-15 cm (or, roughly – guess what? – four inches).

The kind of data that’s got people yelling “military spy technology!” is already routine (if expensive to buy). What’s cool (if that’s the right word) or at least new is the ability to combine the 3D models with realistic images, so that your Big Ben looks like you expect.

In other words: neither Apple nor Google are producing anything new by way of data collection. The “new” privacy invasion, if there is a new one, concerns who is collecting that aerial data, and the uses they intend for it. ®