Every star is sacred, it's like the pop biz, etc

Astronomers at the Max Planck institute have successfully glimpsed one of the oldest galaxies known to man, finally discovering how far away the primordial cluster is and explaining why it produces so many stars. 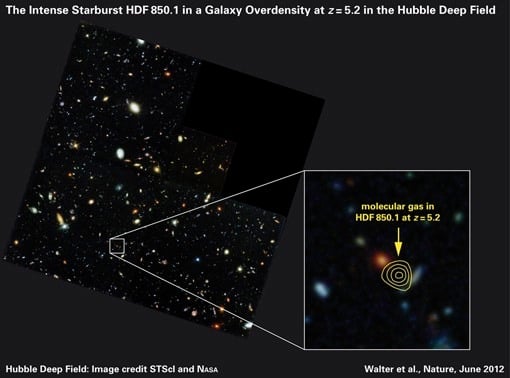 Galaxy HDF850.1 is 12.5 billion light years away, astronomers at the Max Planck institute have discerned, meaning that we see it how it was 12.5 billion years ago when the universe was only 10% of its current age.

That means that the galaxy gives us an interesting insight into the early lives of galaxies and explains the near-incredible rate at which HDF850.1 produces new stars. It produces a combined mass of a thousand Suns per year. For comparison: an ordinary galaxy such as our own produces no more than one solar mass's worth of new stars per year.

The findings will allow for further studies into the history of galaxies and how stars are formed.

HDF850.1 was discovered in 1998 but cannot be seen with a normal telescope, partly because it is shrouded in matter generated by its extraordinary production of stars.

Light from the galaxy is observed only at submilimeter wavelengths which means, the Planck institute say, that they had to use IRAM interferometer, and the Jansky Very Large Array, a giant compound radio telescope in New Mexico, USA.®

'The Intense Starburst HDF850.1 in a Galaxy Overdensity at z = 5.2 in the Hubble Deep Field' will be published in the June 14th, 2012, issue of the journal Nature, announcement here