We're open to the max

Cisco Live 2012 Everybody is talking about OpenFlow, the "Quantum" networking abstraction project that is part of the OpenStack cloud controller, and software-defined networks in general. A lot of the talk has been about removing the hegemony of Cisco Systems in switching and routing. Now it is Cisco's turn to talk, the company's top brass declared at its annual customer event in San Diego.

Cisco executives talked for hours about software-defined networks and Cisco's plan to create them on its switching and routing iron. Execs holding forth at the preceding press conference included Shashi Kiran, senior director of data center, cloud, and switching solutions, and David Yen, general manager of Cisco's Data Center Group. Meanwhile Padmasree Warrior, CTO at the networking giant, gave a keynote address to the multitudes at the Cisco Live event following in its wake. But it was David Ward, dressed in jeans and not wearing any shoes, who stole the show when he explained, at length and rather eloquently, why Cisco has been so quiet about how it was going to make networks externally programmable and why it has taken so long to come up with its Open Network Environment, or ONE for short. 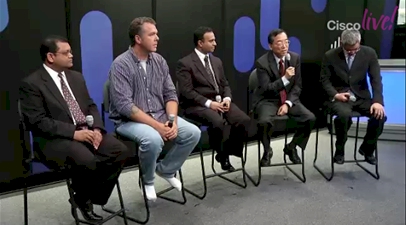 During a Q&A session following the press conference, Ward explained that software-defined networks violate the very tenets of routing and switching, where they state of the network is stored in a config file inside of the gear and also, equally importantly, provides a centralized view of the network topology surrounding any piece of gear. By definition, any SDN approach means making all of this malleable, changing topologies on the fly and having networks react to applications instead of the other way around, when networks simply and silently don't give applications the resources they need if they don't have them allocated.

"It's going to be interesting to watch, and to see whether networking companies are going to be software companies," Ward said, adding that while people have been coming out of universities for many years with all kinds of different programming skills, "not everybody finds BGP and OSPF as exciting as I do."

So what exactly is Cisco's Open Network Environment, and what issues is it trying to solve?

Let's talk about the issues first, and then how Cisco thinks it can solve them.

The way Kiran sees it, there are five different classes of Cisco customers, and they all want slightly different things from a programmable network.

"What pops out in talking to customers is that there is a diverse set of requirements and use cases," explained Kiran. "And there is no one size fits all."

And thus, the Cisco ONE effort is about trying to span all of those five different customer requirements with a common set of platform APIs that will be exposed in all switches and routers running its IOS, IOS-XR, and NX-OS operating systems as a first step.

It will provide a single set of tools, called the onePK development kit, short for ONE platform kit (but with its caps reversed for some reason), which will expose all of these APIs to network administrators and to application developers who want to get in there and make use of a more reactive network – and one which does more than break the data plane from the control plane in a switch and externalize the control plane, as OpenFlow does.

Cisco will initially offer the onePK development tool to hook into its ASR-1000 head-end routers and its ISR G2 branch routers, and it will eventually be available across all ASR, ISR G2, and CSR routers and Catalyst and Nexus switches in a phased rollout. A timeline for that rollout was not given.

Meanwhile the Cloud Services Router (CSR) was announced earlier this week by the firm. It is a virtual machine loaded up with Cisco's IOS operating system and routing software that can be deployed in clouds and extend the corporate network's routing out to those clouds seamlessly from the data center as has been possible to the branch office for years. 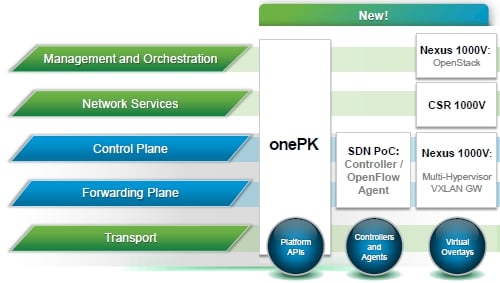 The ONE plan to deliver SDN also includes a number of other elements. Cisco says it is collaborating with various academic and research institutions on OpenFlow, and will deliver proof-of-concept OpenFlow v1.0 agents on the Catalyst 3750-X and 3560-X switches and is leading a number of workgroups at the Open Network Foundation, which steers the OpenFlow effort.

The Nexus 1000v virtual switch, which has been adopted by over 6,000 customers so far, will be the keystone for overlaying virtual networks and making them more programmable, according to the company. The plan calls for Cisco to support the Nexus 1000v virtual switch on Red Hat's KVM and Citrix Systems' XenServer hypervisors, in addition to the VMware ESXi and Microsoft Hyper-V hypervisors it already works with. The Nexus 1000v will also get VXLAN gateway support (bridging VLAN-based physical switching with the VXLAN-based virtual overlays with virtual switching) and will be integrated with OpenStack's Quantum application interface to networks; presumably other cloud fabrics will also be supported at some point, since OpenStack is by no means a dominant cloud controller in terms of installations. The Nexus 1000v will also get REST APIs so it can be programmed with simple web commands – like other systems software available today. The CSR-1000v virtual router will also play a key role in providing programmable services for the network.

Beta trials and general availability of the various ONE components is slated for the fourth quarter of this year. ®