A Scottish council has been accused of crushing free speech by banning a nine year old girl from blogging about her school dinners. 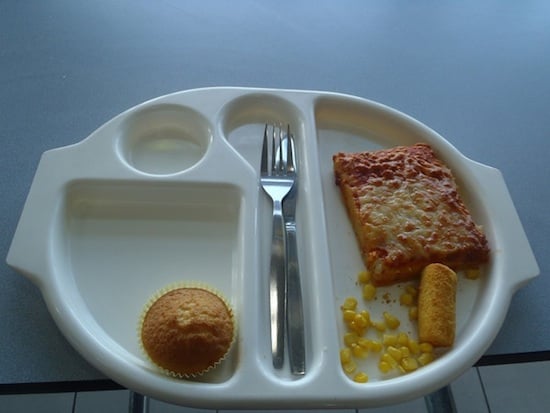 Lunch at a primary school in Scotland: The first photo on the NeverSeconds blogpost that prompted a national media outcry

The blogging nipper - whose write-ups of the cheeseburgers and desultory croquettes that her school were dishing up got attention from the national press - was taken out of class yesterday and instructed not to take any more photographs of her food. In a post titled 'Goodbye' Martha Payne, aka VEG, writes:

This morning in maths I got taken out of class by my head teacher and taken to her office. I was told that I could not take any more photos of my school dinners because of a headline in a newspaper today.

I only write my blog not newspapers and I am sad I am no longer allowed to take photos. I will miss sharing and rating my school dinners and I’ll miss seeing the dinners you send me too. I don’t think I will be able to finish raising enough money for a kitchen for Mary’s Meals either.

Her initial exposure resulted in some big changes - the council sent inspectors to the school and after two weeks the canteen has a salad bar offering unlimited salads, fruit and bread.

I contacted Argyll and Bute Council when Martha told me what happened at school today and they told me it was their decision to ban Martha’s photography.

It is a shame that a blog that today went through 2 million hits, which has inspired debates at home and abroad and raised nearly £2000 for charity is forced to end.

Argyll and Bute Council are preparing a statement, we'll update when we receive it.

A linked page to a Food for children charity has raised over £6000. ®