An hour after accusing a nine-year-old girl of causing distress with her "inaccurate" lunch blog, the Argyll and Bute council has overturned its cameras-in-the-canteen ban and once again allowed school children the option of photographing their lunch. 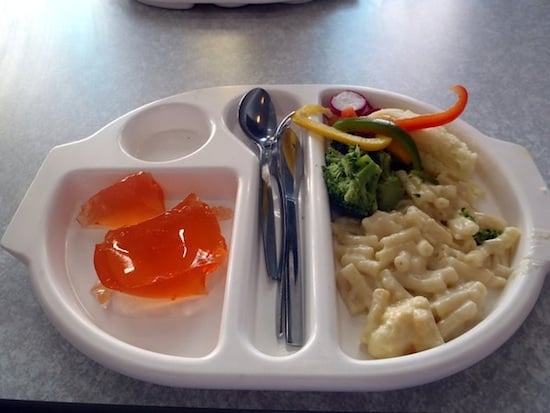 The last meal photographed by nine-year-old food blogger Martha Payne: she approved of the contrast between the radishes and the macaroni.

"There is no place for censorship in this council and never will be whilst I am leader," said Argyll and Bute council leader Roddy McCuish, in a statement just issued. Promising that he would ask the council to "clarify [its] policy position in regard to taking photos in schools", he said that senior officials should "consider immediately withdrawing the ban on pictures from the school dining hall".

The ban yesterday, and the council's defence of it today, caused a web storm, pushing the dinner blog up to the top two trending topics on Twitter in the UK, and the most read story on the BBC. The school dinner blog NeverSeconds had been cited in the national press before it was banned, but got much more intense global interest after Martha was banned from continuing it yesterday. The young food-blogger recounted how she was taken into the headmistress's office and told that she was no longer allowed to use a camera in the canteen.

McCuish did lay into the newspapers who picked up the blog, though he didn't name the Daily Record, which - according to the BBC - was the one that sparked concern among the canteen staff. Apparently the Record ran the headline: "Time to Fire the Dinner Ladies".

We all must also accept that there is absolutely no place for the type of inaccurate and abusive attack on our catering and dining hall staff, such as we saw in one newspaper yesterday which considerably inflamed the situation.

He promised a "School Meals Summit" and said that he personally would meet Martha and her father.

We don't know if eggs are on the menu at Lochgilphead Primary School, but they are on everyone's faces at the local council.

On the plus side, the schoolgirl's blog supports charity Mary's Meals, and the publicity appears to have helped it raise over £21k, well over the £2k it had raised as of this morning, and almost three times the goal of £7k. ®