HP has unveiled its newest global bit barn and says it will form part of the network used to deliver its converged cloud services to customers around the world.

The new facility, dubbed Aurora, is located on the fringes of Sydney in a district adjacent to the major highways that surround and/or exit the city (the end of Roberts Road for you Google Maps fiends out there). Aurora therefore nestles among colossal warehouses for supermarket chains and the likes of LG.

Intended largely for domestic consumption, including Australian government agencies who all insist on domestic data domiciling, Aurora will also serve as a node in HP’s global network of data centres. Active/active capability between the Sydney facility and other HP data centres around the world mean Aurora will be used by some HP global clients as a disaster recovery option, or by design if desired. HP’s Converged Cloud Services will also be delivered from the facility.

HP feels Aurora is its best effort at data centre design to date anywhere on the planet and points to a concrete slab as one of the features it got for its AUD$200million investment.

All that grey stone, plus the rows of chunky, steel, yet-to-be-filled racks, give Aurora the look and feel of an IKEA emptied out to host some kind of Hunger Games-esque game of life-and-death, or at least a scary real-world first-person shooter. The slab’s raison d'être is rather less sinister: as a greenfield site Aurora doesn’t need raised floors and instead pipes all necessary cables in from the ceiling. The latter are impressively high, the better to allow vapours to rise from servers humming away within. 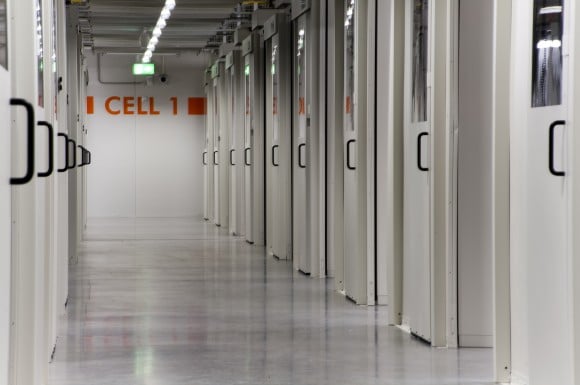 Data centre or FPS venue? You be the judge.

HP expects plenty of heat. The centre can cope with 10Kw in each rack, but HP expects 4Kw will be the norm. Heat drains into a hot aisle and heated air is sucked skywards.

44 racks have been set aside for ultra-high density kit that needs more juice and a little more cooling. Another exception is a 500m2 raised floor, an installation needed for some older kit that won’t play nicely on the concrete slab. The raised space is expected to be home to customer kit migrated to the centre, while newer equipment will reside on the main floor. 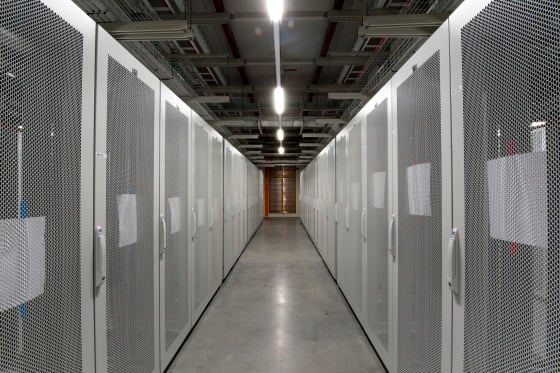