HP has adopted a new area metric – the tennis court – to size the centre. We’re happy to report, therefore, that 48 Nadal-vs.-Djokovic-sized spaces reside under Aurora’s roof. Just nine courts worth are currently kitted out and those are part of what’s called “Cell 1”. Cells 1 and 2 reside inside a single “shell”. A second shell has two more cells, while a third will offer an additional single-cell shell. Each shell is independently powered, fed, watered, fireproofed and connected to the outside world.

No data centre launch goes by without someone trying to say how green it is. Aurora is no exception as HP says the centre has a power usage effectiveness rating of 1.3, which means that for every watt that enters the building, one will go straight to IT kit. The rest goes to coolers, lights and the rest of the kit necessary to run a data centre. HP is chuffed to have hit 1.3, and says those high ceilings are a big help. There’s also a roof-load of heat exchangers that take warm air out and return it at just 24 celsius. The company says until the outside temperature hits 33 celsius there’s very little rooftop action, with passive cooling the main approach to managing the internal climate.

The site does get rather hot: a reporter from the local newspaper the Blacktown Sun asked HP spokesfolk how Aurora would cope with a repeat of last summer, when the mercury passed 45 celsius for five consecutive days and didn’t fall below 28 at night. HP feel sure Aurora will do just fine (and please don’t imagine Eastern Creek is some kind of antipodean hellmouth: the part of Sydney it’s in gets regular winter frosts).

The site has room for another two five-shell buildings and once those arrive HP will construct its own electricity sub-stations on site.

An aerial view of Aurora, with the current facility at left and space for new data halls at right.

Security is very tight: dignitaries who opened the giant shed last Wednesday, including Australia's Minister for Broadband, Communications and the Digital Economy, Stephen Conroy, were forced to do so in a marquee set up in a car park. HP even laid on a rolling loo (complete with icky hand-pumped flush mechanism) to ensure no-one needed to enter Aurora.

Conroy was not fazed by that facility and declared the AUD$200m centre a sign of extreme confidence in Australia's non-recessionary economy, while local HP bods talked up a long queue of customers waiting to pass through its mystic portal.

Speaking of that portal, it includes a feature called a “man trap”, a round airlock-like door that has measures the weight of occupants. If two people stand on the man trap, it won’t open and security guards will arrive promptly to ask why you didn’t read the “NO TAILGATING” signs present in the lobby. HP supplied even the lobby photo, as your correspondent was not allowed to photograph any part of Aurora’s interior. Nor is any other visitor allowed to capture images. 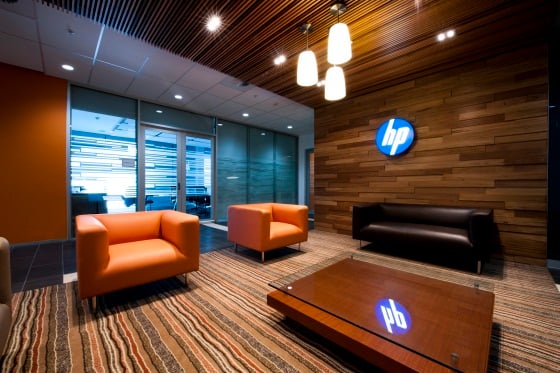 Palm-reading biometric devices are required to enter many areas of the centre and only some security personnel are rated to allow entry.

El Reg’s visit was therefore accompanied by a guard, and we had to leave our phone, laptop and dignity at the door.

Three Australian enterprise have already moved to Aurora, and CIOs from each – rural services provider Elders, Downer EDI and energy company Origin – declared the centre will help them to get away from the mucky business of running their own IT and instead make all sorts of things HP’s problem.

HP’s South Pacific Managing Director David Caspari beamed during their rehearsed testimonials, but did make a rather nervous joke when one of the CIOs offered a definition of cloud as “when I stop using, I stop paying.” ®