A Scottish council have said that a nine-year-old food blogger was misrepresenting her school dinners and distressing the canteen staff, by publishing a photoblog about her lunch.

The media attention caused by the photos, such as the one below was causing "distress and harm" to staff the council said. 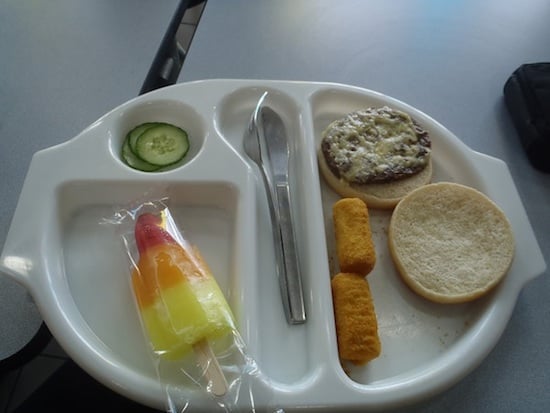 The photos, such this one were causing distress and harm, said the council

The Argyll and Bute council have hit back strongly at claims that their dinner selection is unhealthy: justifying their decision to ban primary-schooler Martha Payne from continuing her school dinner blog NeverSeconds. They claim that the tot's representation of her lunch was false:

Argyll and Bute Council wholly refutes the unwarranted attacks on its schools catering service which culminated in national press headlines which have led catering staff to fear for their jobs. The Council has directly avoided any criticism of anyone involved in the ‘never seconds’ blog for obvious reasons despite a strongly held view that the information presented in it misrepresented the options and choices available to pupils

The apparent emergence of an all-you-can-eat salad bar two weeks after the blog started was not a triumph for the blog, but had in fact been there all along, they claim, saying: "there have been no changes to the service on offer since the introduction of the blog."

They clarified that they have not fully banned the blog, but have forbidden the taking of photos in the canteen.

the photographic images uploaded appear to only represent a fraction of the choices available to pupils, so a decision has been made by the Council to stop photos being taken in the school canteen.

The council asserted that they had received no complaints about the quality of the school's dinner options for two years apart from the one received from the Payne family.

Those interested in more about the menus on offer in Lochgilphead Primary School, Scotland can be reassured that main course choices like meat or vegetarian lasagne served with carrots and garlic bread or chicken pie with puff pastry, mashed potato and mixed vegetables will served over the next few months.

The publicity achieved by Martha's campaign has raised well over £10,000 for the local food charity that her blog supports - Mary's Meals. ®