Possibly a 'massive' reorganization, or not

The rumors are going around that someone high up in the organization was going to get the axe at software giant and systems playa Oracle when the company reports its financial results for the fourth quarter of fiscal 2012 on Thursday.

According to a report written by JMP Securities, and published in Murdoch Wall Street rag Barron's, Keith Block, who has been at Oracle since 1986, will be down the door.

Block is currently executive vice president of North American sales and consulting at Oracle, and manages a team of 10,000 employees, a job which he has had for the past ten years and through which he has dealt with quite a large number of product additions and transitions.

It seems like the acquisition of Sun Microsystems was a bit too much for Block, after Oracle did a core dump of internal documents from HP that it obtained through the discovery process in its ongoing lawsuit over the fate of the Itanium processor and Oracle's software upon it.

HP retaliated by doing some document dumping of its own, in this case an instant message exchange that Block had with Anje Dodson, vice president of human resources at Oracle, on July 28, 2011, and it is pretty clear that Block resented that Oracle co-founder and CEO Larry Ellison brought in tennis buddy Mark Hurd to be co-president, over Block's head. And then Block said this, probably sealing his fate once it was made public: 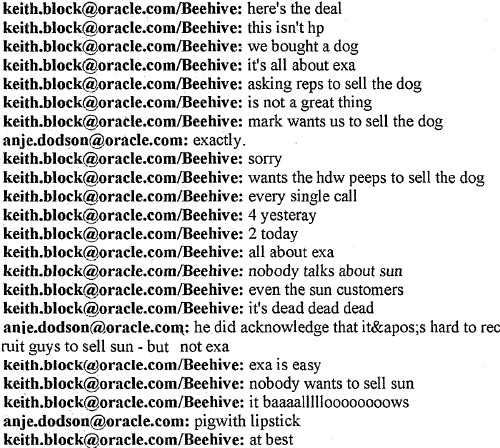 It is not a coincidence that HP released this IM exchange. It was put in the public domain along with another IM exchange that Block had with another Oracle executive on February 28, 2010, a month after Oracle closed the Sun deal when he said "we are going to fuck hp" and "i am a man on a mission on this."

Probably doesn't make much sense for Block to send a resume to HP, if he is let go.

El Reg reached out to Oracle for comment, but as of press time, the company had not returned our call. And given that Oracle is in its quiet period, we don't expect any comment anyway.

JMP's research note says that Oracle may be undergoing a "massive" reorganization. The Associated Press reports that Rick Sherlund, analyst at Nomura Securities, was told by an unnamed source that Block actually left Oracle last week.

Oracle's stock price fell 2.1 per cent on the rumors. We'll find out on Thursday what the deal is. ®