IBM US nuke-lab beast 'Sequoia' is top of the flops (petaflops, that is)

Power on the rise, x86 slipping a bit

The Top 500 list is put together twice a year by Hans Meuer of the University of Mannheim; Erich Strohmaier and Horst Simon of Lawrence Berkeley National Laboratory; and Jack Dongarra of the University of Tennessee. It is not meant to be a performance benchmark on which to base acquisition decisions, but it is useful for seeing trends in system design and projecting how they might be more widely adopted in the broader HPC market in the near term and in the mainstream systems market over the long haul.

To get onto the Top 500 list this time around, a machine needed to hit at least 60.8 teraflops. The aggregate performance of the entire list comes to 123.4 petaflops, a 66.3 per cent increase from the aggregate 74.2 petaflops on the November 2011 Top 500 ranking and more than double the 58.7 petaflops of a year ago. This time around, there are 20 machines with 1 petaflops or more of floating point power, and they are clearly bringing up the class average. But so is the addition of more powerful machines, many with GPU coprocessors, lower down in the list.

Speaking of coprocessors, there are now 58 machines on the Top 500 list that use accelerators of one kind or another – up from 39 machines in the November 2011 list. Of those 58 machines, 53 use Nvidia Tesla GPU coprocessors, two use Advanced Micro Devices' Radeon graphics cards, and two use IBM Cell processors. A year ago, there were only 17 machines with GPUs. This is beginning to smell like a ramp, much like when Linux took over as the operating system for supercomputers (more or less) in the late 1990s.

But Intel is starting to get in the game now, too; an Intel research machine code-named "Discovery" is ranked number 150 on the list. Discovery was built with Xeon E5-2670 processors stoked with "Knights Corner" MIC x86 coprocessors. This machine weighs in at 118.6 teraflops sustained against 181 peak teraflops on the Linpack test, and delivers 1,176 megaflops per watt. 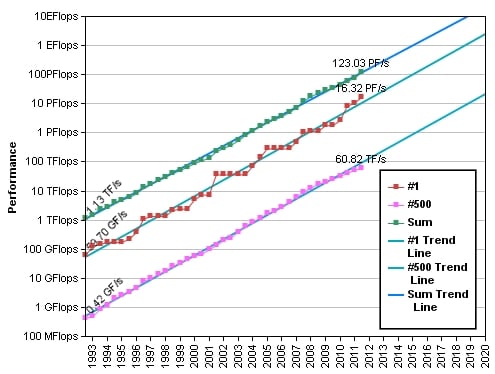 On the CPU front, 372 of the machines, or 74.4 per cent of those on the list, are based on Intel Xeon or Itanium processors, down slightly from the 384 machines on the November list and obviously impacted by the addition of a slew of BlueGene/Q iron as well as the delay in the roll-out of the Xeon E5 processors from last fall to this spring. Oddly enough, there are 246 machines using Intel's prior Xeon 5600 generation processors – this is up from 240 six months ago. That said, there are 44 machines based on the Xeon E5s, compared to 10 on the November 2011 list when the machines were built using pre-launch processors with the blessing of Intel.

The current Top 500 has 58 Power-based machines, up from 49 six months ago. There are 63 clusters based on AMD's Opteron processors (some with GPU coprocessors, some not), and that is 12.6 per cent of the pool. It is also the same number as on the November 2011 ranking.

In terms of core counts on the CPU side of machines, 74.8 per cent of the machines on the list have six or more cores. The average system on the list has 26,866 cores, up from an average of 18,383 six months ago and 15,520 a year ago. Average power consumption of a machine on the Top 500 is now 671 kilowatts, up from 634 kilowatts last November and 543 kilowatts last June.

IBM and HP pretty much have a lock on commercial HPC customers; together the two firms account for 247 of the 249 machines not going into government or academic labs. ®