The venerable Voyager 1 spacecraft seems to be a little closer to leaving our Sun's neighbourhood behind and entering interstellar space, says NASA.

The space agency has outlined three criteria that must be satisfied before Voyager will be deemed to have left the heliosphere, the first of which is detection of galactic cosmic rays. Voyager apparently detected a 25 per cent increase in such rays between January 2009 and January 2012, but recent readings apparently surpass that rate of growth and represent a “very rapid escalation” in galactic ray detection. 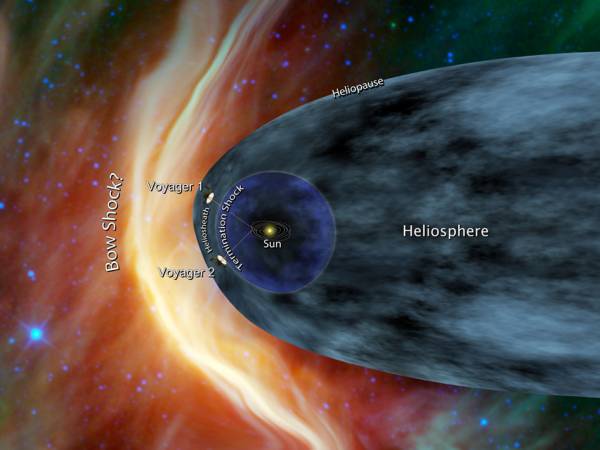 The Voyagers are here, NASA says

The second factor NASA believes could point at crossing the threshold between solar space and interstellar space is measurement of energetic particles found near the sun. The agency's recent report on Voyager 1's progress says the probe has found a “slow decline” in the prevalence of such particles, but there's no smoking gun just yet. Indeed, NASA says if Voyager had passed beyond the heliosphere we would expect their presence to drop off “precipitously”.

The third sign that Voyager 1 has well and truly left the building would be a re-orientation of magnetic fields around the craft. There's no sign of that yet.

NASA officials nonetheless gushed about the possibility that Voyager 1 might break through into interstellar space real soon now. Indeed, it may already have done so, as the agency says it's crunching recently-arrived data in ongoing efforts to ascertain just what's going on out there.

Voyager's high gain antenna, which sends science data back to earth, is said to send data at rates “ … as high as 7.2 kilobits per second”. Recent reports suggest the probe is 17,911,000,000km from earth, so we're pretty sure there's a few packets dropped along the way. That could make ascertaining just when the craft enters interstellar space a tad tricky, you'd imagine. ®