HPC blog China shocked the supercomputing world in late 2010 with a chart-topping 2.56 Petaflop/sec Tianhe-1A. It was a surprising system on several levels: 1) it topped the incumbent number one box (Oak Ridge’s Jaguar) by almost 50%; 2) it was the first (and, so far, only) hybrid commodity combo of Intel Xeon and NVIDIA Tesla processors to hit the top spot; and 3) it seemingly came out of nowhere, and it came out of nowhere very quickly.

Now it looks like we’re getting some advanced notice on the next Chinese Top500 shocker. I had a conversation at ISC’12 with one of Tianhe-1A’s designers, Liu Guangming, director of China’s National Supercomputer Center in Tianjin. Liu led me down part of China’s supercomputing roadmap and let slip that they fully expect to be firing up a shiny 100+petaflop/sec supercomputer within the 2015 timeframe.

Right now, they’re evaluating the architecture for this new system, and they have several choices to make. First, what CPUs will they use? They can go with Xeons (like Tianhe-1A), or with AMD, or with new China-designed and built CPUs.

Then they have to decide whether they’re going to go down the hybrid road again. If they do, will they go with NVIDIA GPUs (again, like Tianhe-1A) or locally built accelerators? It’s not surprising that they’re working on their own GPUs; my pal Rich Brueckner at insideHPC confirmed this last winter at NVIDIA’s GTC conference in Beijing.

During my translated conversation with Liu, I confirmed both the timeframe and anticipated performance of the new system: “100 pflop/s? By 2015? Really?” The reply I got was what I’d call a confident, if not supremely confident, “Yep.” 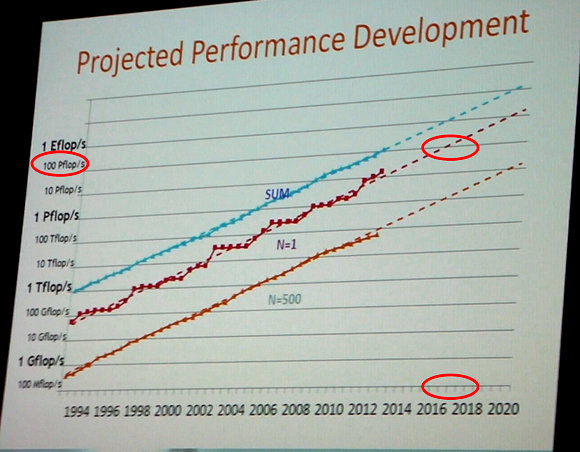 China is looking to beat this projected performance timetable.

So how big a deal is this? Based on Top500 performance projections (given during this morning’s keynote presentation), we should see single system 100 petaflop/sec performance sometime in 2017. (The accompanying photo was taken during the presentation, so it’s not great quality. But I’ve circled the appropriate 100 petaflop mark on the Y axis, where it intersects with the performance prediction, and when it’s supposed to happen in red.)

If China pulls this off, we’ll see 100 pFlop/s a full two years before it we’d expect it to happen based on today’s projections, which will be quite an achievement indeed. ®