Japanese boffins at the National Institute of Information and Communications Technology (NICT) have been showing off a new real-time alert system designed to help security teams spot and visualise cyber attacks more effectively.

The DAEDALUS (Direct Alert Environment for Darknet And Livenet Unified Security) system has been in the making for several years, and detects threats via large-scale monitoring of the internet’s unused IP addresses, which NICT calls the ‘darknet’.

Here’s an explanation from a 2009 research paper:

We propose a novel application of large-scale darknet monitoring that significantly contributes to the security of live networks. In contrast to the conventional method, wherein the packets received from the outside are observed, we employ a large-scale distributed darknet that consists of several organisations that mutually observe the malicious packets transmitted from the inside of the organisations. Based on this approach, we have developed an alert system called DAEDALUS.

DAEDALUS is able to alert security teams when an active IP address in the organisation is trying to send packets to an unused IP address on the darknet – a sure sign that a virus is beginning to spread internally.

The real whizz-bangery is in the 3-D user interface which represents this data.

Users are presented with a giant blue globe at the centre of the screen representing the internet, with a series of circles suspended around it in orbit – these are the networks under observation, as pictured below. 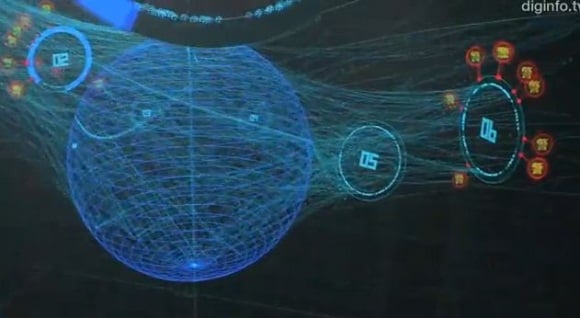 Each circle displays in blue the proportion of the network containing active IP addresses and in black those that are not used.

Alerts are also displayed and can be clicked through to present more information, for example on which IP address they are spreading from, the time and type of threat.

NICT currently monitors 190,000 IP addresses in Japan but the potential for use internationally is obvious.

The technology will be made available for free to Japanese universities, but local tech firm Clwit is the big winner as it will reportedly be given commercial access to the tool to wrap into a new product dubbed SiteVisor.

Check out the video courtesy of Japanese tech site DigInfo. ®