Your data shall be like unto the gods themselves

Data ONTAP is NetApp's operating system for its FAS arrays and provides a unified file (NFS, pNFS and CIFS/SMB) and block (iSCSI, FCoE and Fibre Channel) storage array architecture. NetApp customers have been waiting for the company to integrate its acquired Spinnaker clustering technology into ONTAP and this release represents another stage of this multi-year effort.

- Immortal operations through zero downtime. System upgrades and maintenance don't disrupt array operations.
- Infinite scalability with a single volume that can grow to 20PB. Er, sorry NetApp but 20PB is not infinite. I know; we're being picky.
- "Set it and forget it" data protection.
- Virtual array with Data ONTAP Edge; a version of ONTAP running as a virtual machine in an ESX server, which is cheaper than a FAS array and suitable for remote/branch offices needing up to 5TB of capacity
- Secure multi-tenancy jointly with Cisco and VMware. - Combining SSD and HDD inside a volume or aggregate in the array as a Flash Pool which provides Virtual Storage Tiering (VST), or tiers without tears and, indeed, without tiers either as the SSDs are used as a read and write cache.
- Clustering of up to six ONTAP arrays with each node potentially configured for different work, such as FC SAN access and filer activity.

The company says ONTAP 8.1.1 also delivers performance improvements and has better manageability and supportability. The Flash Pool technology enables SAS disks to be replaced by SATA ones with SSDs providing I/O acceleration. NetApp is providing this technology across its product range.

Our understanding is that NetApp will extend its VST technology to cover flash caches in servers so as to remove most network latency from data access by apps in servers.

With ONTAP 8.1.1 NetApp can offer an enterprise content repository with NFSv3 access to a container that can scale to 20PB and 2 billion files by using a cluster of five FAS6280 high-availability pair arrays; ten nodes in other words. Snapshot copies and SnapMirror replication are available as us NFS-mounted tape backup.

NetApp has taken over a now-discarded HP marketing theme, saying this new version of ONTAP makes IT agile. Its concept if having a single and multi-purpose storage infrastructure with one set of management and data protection tools is relatively unchanged although it is being amended by the inclusion of the E-Series for applications needing more data access speed.

EMC's chief blogger Chuck Hollis got his ONTAP 8.1.1 riposte in before the launch. He blogs; "after spending a few days getting to know what's in this release, if I were a NetApp customer I'd start thinking about Plan B," and contrasts NetApp's use of flash as a cache with EMC's se of storage tiering. He also contrasts the Isilon scale-out clustering with NetApp, but a high-end Isilon customer isn't likely to want to use a traditional 2-controller array.

On the other hand a traditional 2-controller array customer might quite like the ability to cluster up to ten of these arrays to provide a modest amount if scale-out, compared to Isilon, while retaining the familiar data management tools. 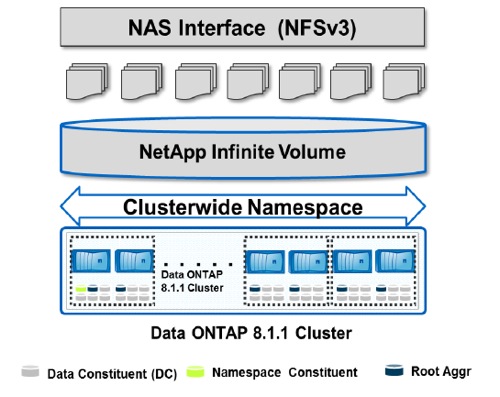 In other words there will be other versions. NetApp notes that; "The Infinite Volume configuration in Cluster-Mode requires a dedicated cluster because it supports one Infinite Volume in a Vserver, and one Vserver for the entire cluster, with the exception of the root Vserver."

Data ONTAP 8.1.1 is orderable now while Data ONTAP Edge will be available in August. ®