The unusually bright floor of an ancient crater at the Moon's south pole may be proof that over 20 per cent of it may be coated with water ice. Or not.

"There may be multiple explanations for the observed brightness throughout the crater," said Maria Zuber, the lead investigator of the team who authored a paper published Wednesday on Nature.com. "For example, newer material may be exposed along its walls, while ice may be mixed in with its floor."

It was, to put it mildly, a thorough investigation. According to NASA's announcement of the research, LOLA made over five million elevation measurements with a vertical resolution of about a micron – a millionth of a meter – to determine Shackleton's structure.

"The crater's interior is extremely rugged," concludes Zuber. "It would not be easy to crawl around in there." 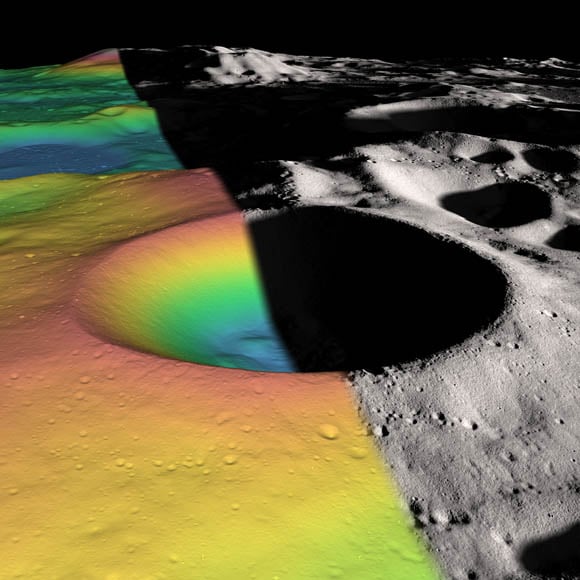 Elevation (left) and shaded relief (right) image of Shackleton (click to enlarge, or here for an enormous version)

In addition to being rugged, it's also frightfully cold – "cosmically cold" is how coauthor Gregory Neumann describes it. Being essentially coincident with the Moon's south pole, almost no sunlight reaches into Shackleton's depths, creating what the abstract to the paper calls "a perennial cold trap.

Shackleton is also an "unusually well-preserved simple crater," the paper notes, with a floor that is essentially the same as it was when it was formed over three billion years ago. What makes the floor interesting – and different from the floor of nearby craters – is its relative brightness. 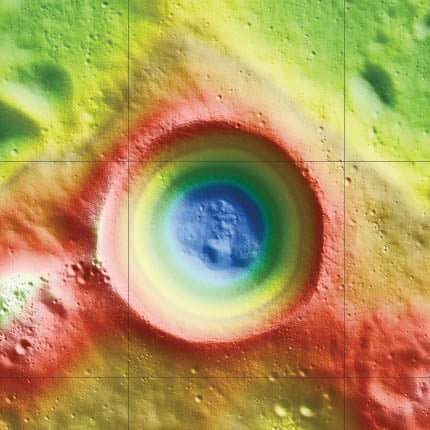 The paper offers two possibilities for Shackleton's brightness: the "most simply explained" reason would be that its lunar location and shadowy depth have limited what the paper refers to as "space weathering", keeping it in pristine condition over its lifetime.

The more-interesting conjecture, though, is that there's water ice on Shackelton's floor. But before you suggest that NASA sequester some of its moon-shot budget for astronaut ice skates, know that the amount of ice that the paper postulates is tiny: a layer of about one micrometre thick covering about 20 per cent of Shackleton's floor.

While the existence of an icy crater floor is still uncertain, one thing is incontrovertible: the LRO – with its laser altimeter, cosmic-ray telescope (CRaTER), radiometer (Diviner), mapper (LAMP), neutron detector (LEND), and camera (LROC) – is doing some excellent science.

Okay, so the LRO's Mini-RF radar was a bit of a bust – but not even the heaviest hitters bat a thousand. ®