Offer view from Seattle if Earth had giant companion

Pic Astro-boffins have located an alien planet pair that are orbiting so close to each other, any inhabitants would see a planet-rise as well as sunrise. 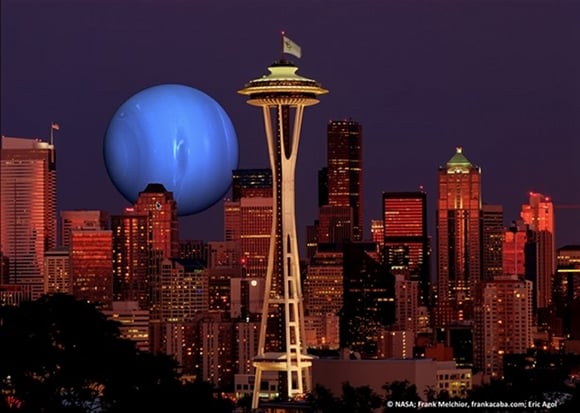 Both of the planets are a little too toasty to play host to life as we know it; the celestial soul-mates are red-hot, too close to their star to be in the habitable zone, but they are the closest planetary comrades ever confirmed.

The cosmic couple was spied by NASA's planet-hunting Kepler space telescope, which lent the couple their names: Kepler 36b and Kepler 36c.

As they orbit their star, with the inner planet 36b going around it every 13.8 days and 36c circling it every 16.2 days, they come within shouting distance of 1.2 million miles (1.93 million kilometres) - just five times the distance from the Earth to the Moon. Naturally, given that it's space, it still sounds pretty far, but it's 20 times closer than any two planets in our own solar system ever get.

36b is a rocky world around 4.5 times the size of Earth, while 36c is a Neptune-like gas giant; planets that are that different to each other don't usually get so close to each to each other. If you could stand the heat on 36c, its orbiting buddy would look like the moon in our sky, but if you stood on 36b, its sky would be filled with the looming giant gas planet in an awesome sight.

"These are the closest two planets to one another that have ever been found," said Eric Agol, a University of Washington astronomy professor and co-lead author of the findings.

Despite the tug-of-war, the planets are in no danger of colliding because of the timing of their orbits. However, the boffins are at something of a loss to explain how such disparate worlds ended up so close together. 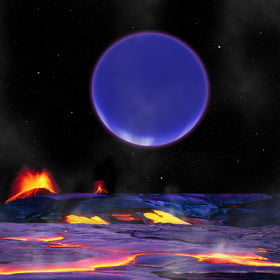 From one alien planet to its friend

Although the planets' densities differ by a factor of eight, their orbits only differ by 10 per cent, which makes it difficult to explain the differences in composition using current models of planet formation; usually the type of stuff on a planet depends on how close it is to its star.

It's the first pair of close planets uncovered in the Kepler data, but the boffins expect to find more, which could shed some light on how worlds end up side by side.

The study, published in journal Science, was also authored by Josh Carter of the Harvard Smithsonian Center for Astrophysics. ®