We all know Alan Turing was a Nazi cipher breaker, which is already cool enough, but a computer games and AI pioneer? That’s a story that's told less often.

Alan Turing achieved many things before his suicide in June 1954, many of which have been written and spoken about during the run-up to the 100th anniversary of his birth on Saturday.

To recap: Turing wrote a paper in 1935 which conceptualised digital computing and algorithms and another in 1945 conceptualising the Automatic Computing Engine (ACE). The 1945 paper contained the first specifications for an electronic stored-program general purpose computer, which was later built at Blighty's National Physical Laboratory from Turing’s design.

Today, we casually toss around phrases like cloud “compute” and talk of algorithms, but until the 1950s, computers were non-electrical calculating machines using systems of switches, levers and – if you were lucky – (IBM’s infamous Hollerith) paper cards to simply automate clerical processes. 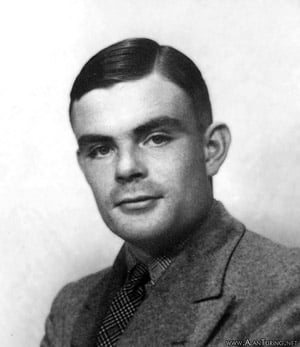 Not just a WWII hero, Turing was a computer chess pioneer too

Between these two landmark pre- and post-war dates, Turing worked to break German military encrypted communications in WWII – most famously the Kriegsmarine’s Enigma messages at Bletchley Park. At Bletchley, Turing helped build the Bombe, pre-electrical computing at its best – row upon row of rotating drums in a huge wooden frame but founded on solid mathematical and algorithmic foundations.

But take a step back and what you’ll see is these were milestones in a bigger journey Turing was preparing to embark upon. While his work helped bring on the dawn of modern computing, Turing was also working towards a bigger concept: digital intelligence. Computers, it seemed, were easy – it was just 10 years between his first conceptual paper in 1935 and the ACE specification in 1945. Making them think and act like people – that was the hard part.

It is said that games foreshadow computing trends. Graphics acceleration, for example, has been rooted in games consoles for years to produce whip-sharp action and crisp pixelation for life-like play for the yoof upstairs in his bedroom.

Today, graphics acceleration is in the smartphone in your pocket. Microsoft, Mozilla and Google are juicing Internet Explorer, Firefox and Chrome using hardware to beat each other and produce “native” HTML5 "experiences".

Pong is considered the first successful computer arcade and home console game – it was a simple game of televised tennis. But 20 years before, in 1950, Turing wrote what chess book author Bill Wall regarded as the first program for a game far more tactical and mentally challenging: chess.

It was the result of a challenge he set two years earlier, as the dust settled on war-ravaged Europe, with colleague Donald Michie – who went on to become a pioneer in artificial intelligence – to see who could be first to write a chess-playing algorithm.

At Bletchley, Turing was turning on to the idea of machine learning and the concept of the brain as a computer as well as its inverse: that computers could be built to act like brains. Chess, Turing thought, was just the kind of puzzle that might bring us closer to computers that can learn and think. In the 1953 book Faster than Thought, Turing wrote a chapter on digital computing as it applied to games.

Along with his chess algorithm, Turing devised the Imitation Game, better known as the Turing Test, in his Computing Machinery and Intelligence Paper. The idea was that the system would attempt to pass itself off as human to a real person. The metaphor? Chess.

Turing had really hit on something with chess, and this became a vehicle for boffins working in computer learning for 60 years. Two years after Turing wrote his chess program, Alick Glennie wrote the first computer compiler that defeated it. In the succeeding decades, the Ivy Leaguers at MIT, the party boys of the Soviet Union and IBM’s white coats all built chess-playing systems.

Next page: Rise of the machines
Page: