Cupertino: 'We ALWAYS pull apps from Store during legal battles'

Apple will not choke off sales of an iPad application that helps disabled children talk from its App Store if the speech therapists behind the app win the patents case that has been brought against them, The Register understands.

Parents of speech-impaired kids using the iPad app 'Speak For Yourself' were distressed when Apple pulled the app from the App Store three weeks ago.

The application's makers – Speak For Yourself LLC – had been slapped with a patent infringement lawsuit in February, but no judgment had yet been passed. The unannounced removal at the beginning of June seemed to suggest that Apple had reached its own decision independent of the court, and would no longer support the software. 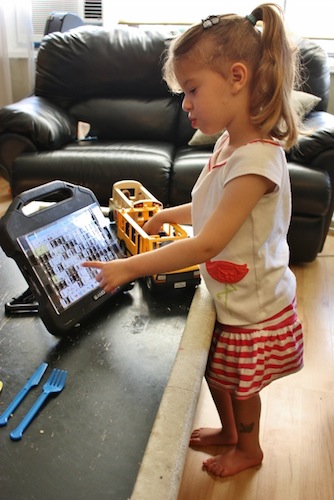 Dana Nieder's daughter Maya relies on the 'Speak For Yourself'
app to communicate with her parents. Photo credit: Dana Nieder

Since the software existed only as an app on iPad, it looked like the end of Speak For Yourself. The app can still run on iPads to which it has already been downloaded, but as developers are unable to issue updates and fixes, it could gradually become buggy and incompatible with the software.

However El Reg understands that there is some light at the end of the tunnel and that Apple will reinstate the app if the court decides in favour of Speak For Yourself's favour. Apple are making no official comment on the case, but we were given an off-the-record briefing.

Apple wants to help the kids

Apple has specifically mentioned its desire to help children with autism and with speech impediments at both the WWDC conference earlier this month – where one of the 10 features introduced in iOS 6 is aimed at helping people with autism read – and on the 'Making A Difference One App at a Time' video from last year, which features an interview with a speech-impaired kid from Nova Scotia and shows the difference the iPad makes in her ability to learn.

Eric Hambright of Alabama, whose three-year-old son Robert has autism and relies on Speak For Yourself to communicate with his parents, was watching the WWDC presentation and said he was encouraged by Apple's efforts to help disabled people with the iPad:

I'm hoping that that's just their legal department [that have removed the app] and that maybe the people doing the presentation don't know. You would think that they were on the side of the children.

My message for Apple is please put the app back in the app store. This is not a trivial game thing, this is the voice of many people. That would be the most human thing to do.

Why Speak For Yourself was removed

It seems that when Apple finds that apps are subject to legal proceedings, it removes them from the store in order to "protect the users" - ie, protect them from the potential legal repercussions of using an app that may be deemed to break the law. There was no significance in the timing of Apple's removal of the app, we were told; the three-month delay between the legal claim and the removal of the app from the store was simply the time taken to process the decision to remove it.

Other assistive speech apps exist - for example ProLoQuo 2 Go - which released an update last week, however we asked both Hambright and Dana Nieder, who blogs about her speech-impaired daughter Maya (pictured above), about the app. Both of the parents said it had not been as useful as Speak For Yourself: "It is a good app that works for many people, but we tried it for a year before SFY came out and it just wasn't good for us at all," said Nieder, who is running a petition against the app's removal. ®

The case SEMANTIC COMPACTION SYSTEMS, INC v. SPEAK FOR YOURSELF LLC was filed on 28th February 2012 in the US District Court of Western Pennsylvania