Not everybody's a fanboi or a Microtard

Open ... and Shut Microsoft roared onto the mobile scene last week with the unveiling of its Surface tablet, but Acer is probably right to question why Microsoft would fight premium iPads with a premium Surface.

After all, the next 10 million apps, and the next billion users, are not going to come from the developed, saturated markets of North America and Western Europe, as Vision Mobile's new research report (Developer Economics 2012: The New Mobile App Economy) points out. Rather, the next phase of mobile market development is projected to come from emerging Brazil, Russia, India, and China (BRIC) economies.

Developers in these markets? They're betting big on Android.

Even in the developed world, demand for Android is outpacing iOS, at least by some measures. Dice.com, for example, reports a 302 per cent increase in job postings for Android developers between 2010 and 2011, versus a 220 per cent jump for iOS developers. Vision Mobile reports that over 75 per cent of those surveyed indicated that they're now supporting Android.

What other choice do they have?

Well, in developed markets they still have plenty of choice, which is why developers continue to write twice as many apps for iOS as they do for Android, according to Flurry data. That choice is fueled by "100X better development tools," as Tilde mobile guru Tom Dale tweeted.

But the long-term choice for developers is driven by user populations, which are predominately everywhere except where the current mobile market is. That is, the BRIC countries and beyond.

In those markets, it's all about Android. 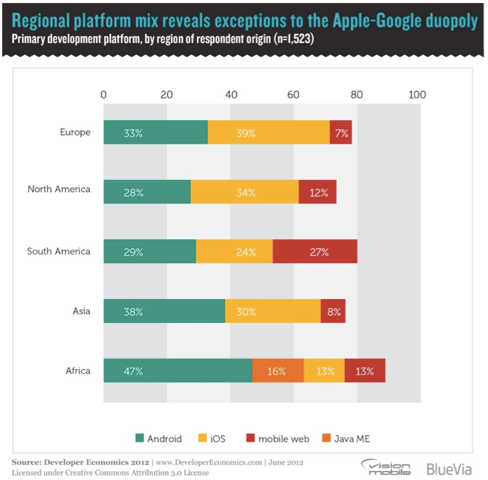 Much of this comes down to cost, as I've argued before. So long as Apple continues to consume most of the industry's mobile profits, it will effectively price itself out of serious competition in developing markets.

And so will Microsoft, as Asymco founder and analyst Horace Dediu posits:

Microsoft faces a dilemma. Their business model of expensive software on cheap hardware is not sustainable. The future is nearly free software integrated into moderately priced hardware.

For Microsoft to maintain their profitability, they have to find a way of obtaining $80 of profit per device. Under the current structure, device makers will not pay $55 per Windows license per device and users will not spend $68 per Office bundle per tablet. Price competition with Android tablets which have no software licensing costs and with iPad which has very cheap software means that a $300 tablet with a $68 software bill will not be competitive or profitable.

As Microsoft tries to transplant its desktop profits to mobile, and Apple hoards the majority of existing mobile profits, both companies are going to have to grapple with the very different economics of BRIC-based mobile development, as Vision Mobile's report highlights:

In Q1 2012, Apple grabbed the lion’s share of the profits. However, the largest share of the mobile handset market was taken not by Apple, Nokia or Samsung, but by the “others” category: the hundreds of handset makers producing the hundreds of millions of units sold annually in the developing world. The so-called “Shanzhai” manufacturers and other assemblers earn very little per-unit revenue, and almost no profit.

Of course, the big question for Android will be how to manage device (and OS) fragmentation, something that is exacerbated by these low-cost manufacturers. When Skype trumpets that "it now works on 1,384 devices," it's hard to tell whether this is good or bad. Yes, it's great that Skype has such broad device coverage, but somewhat scary that Android introduces such a myriad of different devices to cover. OpenSignalMaps reports more than 4,000 device variants for Android to cover, which suggests Skype is only a third of the way to its goal.

It's hard to imagine that Google will be able to ensure Android will function smoothly across such a dizzying array of devices. Having said that, a number of cross-platform tools like Appcelerator and Adobe's PhoneGap have arisen to make apps more portable between different device and OS profiles.

Still, developers will go where the users are, and Android developers are primarily driven by the open-source operating system's user reach and low-cost development. As the Vision Mobile report highlights, the average iOS app costs $27,463 to develop, while Android is less at $22,637. In Microsoft's favor, a Windows Phone app costs $17,750 to develop, but it lacks the user base to make its lower cost profile worthwhile. 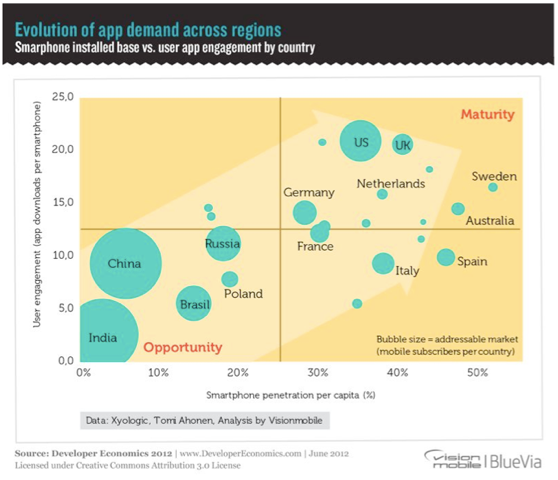 Hence, for device manufacturers that can't distribute Apple and can't afford Microsoft, there's just one game in town, and it's Android. This has made it a big game, indeed.

Still, Android scores far worse than iOS in Vision Mobile's developer survey for its ability to generate revenues, largely due to the comparative few Android users with credit cards on file. In many emerging economies, this is a semi-permanent deficiency, because credit cards aren't widely used. Even in developed markets, apps only have a 35 per cent chance of generating $1 to $500, which means that many developers can't count on app development as a primary source of revenue.

None of which will halt Android's growth in the developing world, but it will almost certainly require developers and device manufacturers there to figure out innovative ways to make money. They're not making it on the hardware or the software or on the apps at present. And the more Android fragments, the problem will just get worse.

Will we reach a point where Android's user numbers are trumped by its lack of cohesion? So far, at least in the developing world, the answer is "No." And so long as that remains "No," it gives underdog device manufacturers time to create dominant marketing brands, as Samsung has done. If this happens, the Android party is only going to get better. ®