War On Standby: Do the figures actually stack up?

Will you stop turning the TV off at the wall

Analysis The War On Standby rumbles on: this week, courtesy of the UK government and "third sector" quangocracy, we heard yet again that gadgets left on standby suck vast, planet-wrecking, expensive amounts of energy from our electricity sockets.

It's an idea which has gained a lot of traction over the years. Many Reg readers (and hacks) nowadays find themselves continually nagged by persons of significance in their lives to the effect that they should be turning such things as TVs, games consoles and computers entirely off rather than leaving them on standby - or even unplugging them or switching them off at the wall when not in use. One of the great achievements of the human race - namely remote control, in particular the ability to walk into a room, flop or sit down, press a button of some sort and cause one's technology to spring to life without any fiddling about - is apparently too expensive and damaging to be permitted.

Meanwhile, curiously, it appears that such things as regular showers, hot drinks and food (previously refrigerated), powerful hair-furtling appliances, clothes and bedding laundered at frequent intervals, heating kept on at high levels throughout the winter etc etc; these are all inalienable human rights.

Does any of this make sense?

On the face of it, maybe so. No less a body than the Energy Saving Trust - a government funded, tax-free quango which also sells consultancy to business, and is warmly endorsed by Friends of the Earth - has just come out with a study of domestic energy use in the UK, which it carried out in cooperation with two government ministries: the Department for Energy and Climate Change and the Department for Environment, Food and Rural Affairs. In it, we learn that a normal UK household can be leeched to the tune of a thumping 600 kilowatt-hours (kWh) of 'leccy by kit left on standby in just one year - which could add £90 to the bill.

That's serious: let's have a look at the EST report (pdf). From it we learn that total draw from standby power in a house is at the lowest 47 watts, at the highest 81 watts. If you assume that consumption 20 hours a day, the high number gives you your 90 quid.

We know this because:

In fact the EST report is merely a dumbed-down version of the proper report, which we can read courtesy of DEFRA here (also pdf). We find that the study was carried out on a rather small group of households - just 11 houses were monitored continuously for a year, though others were monitored for a single month so that for each month of the study there were thirty-odd households being monitored; all occupied by the owners as no rental homes were included.

But what about this mysterious software which can tell when devices are on standby and accurately say how much power they use? How did we arrive at these very large amounts of power on standby? Because they are very large. Modern tellies use less than a watt of juice on standby - the latest ones less than a tenth of a watt. There are rogue 10W+ set-top boxes etc out there, but you'd need several duff gadgets at least to get up to 47 watts, let alone 81 - and it can't be the case that the average household contains several such dodgy devices and leaves them on 24/7 when not in use.

So what are the figures based on?

The "sites" include all the ancillary bits of kit as well as the main one: ie the AV site includes not just the telly but set-top boxes/DVRs, disc player etc. The computer site includes attached monitors, speakers, the modem/router, printer and so on.

The "low" figure of 47 Watts total standby power, we are informed, is calculated by adding up all the different bits of kit's individual consumption while on standby and averaging across the sampled households.

Getting into detail, the report says that the typical AV site on standby consumes 17.8 watts and the computer site 9.3 Watts: total 27.1 Watts, barely over half the 47-watt total. So even by the report's figures, it would seem that actually there must be some major standby villains in the home apart from gadgetry.

And frankly, delving further, the "special software" which can "tease out" the standby power would appear to produce erratic results to say the least of it. For instance, two appliances listed as "Aerials" were monitored during the study (one must assume that these were boosted aerials, as they were plugged in to power sockets). 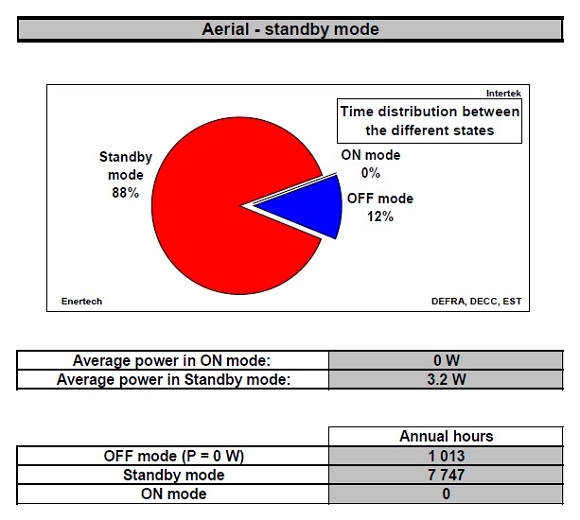 Aerials: The shocking truth. We never switch them on, therefore they are on 'standby' almost all the time. But if we did switch them on they would use no power!

According to the "special software", "Aerials" use zero watts when switched on - which they never were during the entire study period, apparently. But they were "on standby" for no less than 88 per cent of the time monitored, drawing 3.2 watts average. This is plainly bunk. They were simply on: but the software wasn't capable of detecting the fact.

You can only use it to weigh yourself now... how disgustingly low-tech