Researchers in Texas have discovered a way to break down the components of a battery into liquid form and paint power cells onto everyday objects. 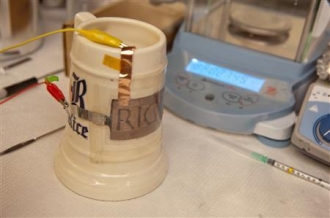 In a paper published in Scientific Reports, the team at Rice University detailed the development of fluids that mimic the conventional lithium-ion battery components, and then painted them on tiles, beer steins, steel, and flexible surfaces. The wafer-thin layers can then be charged up and run like a normal battery.

"There has been lot of interest in recent times in creating power sources with an improved form factor, and this is a big step forward in that direction," said Pulickel Ajayan, Rice’s professor in mechanical engineering, materials science, and chemistry.

The material used in the layers ranges from the exotic to the prosaic. To manufacture the positive current collector the team used carbon nanotubes in solution, while its negative collector counterpart consists of commercially available copper paint mixed with ethanol.

The team hand-painted nine bathroom tiles with the components and charged them using a solar cell and installed current. They discharged a steady 2.4 volts for six hours and went through 60 charge/recharge cycles with very little loss of capacity, while the power absorption capacity of the tiles was remarkably uniform despite the hand-painted process.

"Spray painting is already an industrial process, so it would be very easy to incorporate this into industry," said lead author Neelam Singh.

While the technique is interesting, don’t expect to buy a can of battery paint any time soon. Some of the materials used are highly toxic and the painting itself needs a special argon-filled chamber for assembly. The team is now working on adapting the paints to be safer to use and adding water and oxygen sealants to get the batteries working outside the laboratory.

Is right! Ofcom says Scousers enjoy a natter on the phone compared to southern blerts

Australia down for scheduled maintenance: No talking to Voyager 2 for 11 months

Was it something I said?